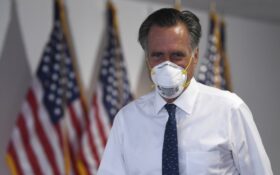 Americans hoping for answers under oath from key players in the biggest scandal to rock the White House in a generation may have to keep waiting.

And in this case, the reason isn’t just the usual political nonsense — and it has Rep. Matt Gaetz, R-FL, questioning whether a so-called Republican has secretly changed political parties.

At least one and perhaps several Republicans in the Senate are actively working against efforts to get to the bottom of “spygate” – and one report says President Donald Trump’s biggest nemesis from his own side of the aisle seems to have been working recently as a key Democrat player.

Despite an arrest being announced Friday of a former FBI lawyer, there is frustration among Republicans.

“We had a number of my committee members that were highly concerned about how this looks politically,” said Johnson, who chairs the Senate Homeland Security and Governmental Affairs Committee.

In other words, rather than looking for answers and uncovering the truth, they’re worried about how it looks in the media.

Johnson’s committee has eight Republicans and six Democrats. If just one Republican joins with the Democrats, it becomes a 7-7 tie, effectively blocking any subpoena.

“I’m just not going to be naming names that way,” he said.

But Romney has said in the past that he’s concerned with an investigation looking political, especially as the election approaches.

And Cassandra Fairbanks of Gateway Pundit said her sources have told her the failed 2012 presidential candidate is behind it.

“Romney was for impeachment. He has been against Trump every step of the way. Now he is obstructing going after the leakers and liars who went after Trump,” the source was quoted as saying,

Romney was the only Republican in the Senate to vote to remove President Donald Trump during the impeachment trial earlier this year.

Before the impeachment and since, he’s actively worked against the Trump administration, causing some to call for him to be booted from the party.

“If I were [Senate Majority Leader] Mitch McConnell, R-Ky., I would expel Mitt Romney from the Republican caucus,” Rep. Matt Gaetz, R-Fla., told Lou Dobbs Tonight. “He is not acting like a Republican. He has shown no interest in working with this administration, or with Republicans who are eager to seize the opportunity of the Trump presidency.”

And now, he could be seizing another kind of opportunity – the opportunity the help Democrats block a key investigation.

President Trump has repeatedly accused members of the Obama administration of engaging in a massive spy operation against his campaign, started for political reasons rather than legal ones.

A president of one party, he says, used the power of the Executive Branch to spy on the campaign of another party.

“Some terrible things happened,” Trump said earlier this summer. “And it should never be allowed to happen in our country again.”

The secret probe into his campaign was built on unsubstantiated allegations and FISA warrants that never should’ve been issued, and kicked off years of investigations and probes that stopped the Trump administration from effectively carrying out its agenda.

Instead of making policy, Trump’s team was fending off special counsel Robert Mueller and his investigators.

Now, leading Republicans are demanding answers. They want to know who knew what and when – and specifically, who authorized the spy operation, and why.

But those answers may never arrive – and it could be because of Romney teaming up with Democrats to stonewall the investigation… a partnership that GOP skeptics say is happening far too often.

As Matt Gaetz put it back in February, “Frankly, I don’t know what the difference is between Mitt Romney and a Democrat at this point.”