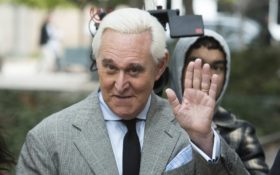 Questions about the impartiality of the head juror that convicted Roger Stone, a former adviser to President Donald Trump, have surfaced in recent days — and it has Stone supporters demanding the trial be declared a mistrial.

According to reports, former Memphis City School Board President Tomeka Hart spoke out on social media and claimed to be the foreperson of the jury that convicted Stone of obstruction of justice charges.

Hart said she couldn’t “keep quiet any longer” on the sudden resignation of four Department of Justice prosecutors.

“I want to stand up for Aaron Zelinsky, Adam Jed, Michael Marando, and Jonathan Kravis — the prosecutors on the Roger Stone trial,” Hart wrote in a Facebook post. “It pains me to see the DOJ now interfere with the hard work of the prosecutors. They acted with the utmost intelligence, integrity, and respect for our system of justice.”

“As foreperson, I made sure we went through every element, of every charge, matching the evidence presented in the case that led us to return a conviction of guilty on all 7 counts,” Hart added.

Critics quickly pointed out that Hart had a long history of anti-Trump, pro-Mueller social media posts. She once ran for Congress as a Democrat in 2012, and couldn’t be considered an impartial juror.

She even tweeted an apparent celebration about Stone’s conviction while she was leading the jury in his trial.

– Despised Trump and his inner circle

The controversy began after the four lawyers who prosecuted Stone quit the case after the Justice Department overruled them and said it would lower the amount of prison time it would seek for President Donald Trump’s longtime ally and confidant.

The department insisted the decision to undo the sentencing recommendation was made Monday night — before Trump’s tweet — and prosecutors had not spoken to the White House about it.

Each had signed onto a Monday sentencing memo that recommended between seven and nine years in prison for Stone, who was convicted of lying to Congress, witness tampering and obstructing the House investigation into whether the Trump campaign coordinated with Russia to tip the 2016 election. None lent their names to a Tuesday memo that called the original recommendation excessive.

The departures leave in limbo the resolution of a case that was one of the signature prosecutions of Mueller’s team and that cut to the heart of his mission — to determine whether the Trump team had access to nonpublic information about Democratic emails hacked by Russian operatives and provided to WikiLeaks.

Trump was back on the attack late Tuesday, slamming the original sentencing recommendation and questioning the judge overseeing the Stone case. And by early Wednesday, he had tweeted congratulations to Attorney General William Barr “for taking charge of a case that was totally out of control and perhaps should not have been brought,” suggesting the prosecutors had gone rogue.

Barr, the Justice Department’s leader, has been a steady ally of the president’s since taking the position. Barr last year cleared the president of obstruction of justice and has declared that the FBI’s Russia investigation, which resulted in charges against Stone, had been based on a “bogus narrative.”

It’s unclear what sentence the department will ultimately seek — a new sentencing memo filed Tuesday evening indicated that the original recommendation was too harsh but proposed no specific punishment of its own.

In their revised sentencing memo, Justice Department officials argued the initial recommendation could be “considered excessive and unwarranted under the circumstances” but also said they would defer to the court.

The departures began soon after. Aaron Zelinsky, a Mueller team member, quit the case and his job in Washington, with plans to return to his position as a federal prosecutor in Baltimore.

Another early Mueller team member, Adam Jed, also withdrew from the case. His status at the Justice Department was unclear.

Another federal prosecutor in Washington, Michael Marando, withdrew from the case, and a fourth trial team member, Jonathan Kravis, resigned his position as an assistant U.S. attorney.

Sentencing decisions are ultimately up to the judge, who in this case may side with the original recommendation.

U.S. District Judge Amy Berman Jackson has repeatedly scolded Stone for his out-of-court behavior, which included a social media post he made of the judge with what appeared to be crosshairs of a gun.

The prosecutors wrote that “Stone’s actions were not a one-off mistake in judgement” and that he “decided to double — and triple — down on his criminal conduct by tampering with a witness for months in order to make sure his obstruction would be successful.”

Stone has denied wrongdoing and criticized the case against him as politically motivated. He did not testify, and his lawyers did not call any witnesses in his defense.