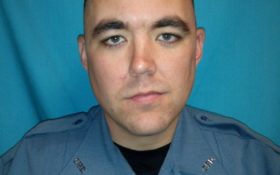 A dying Missouri officer said over the police radio that he had been shot multiple times and didn’t think he could make it through the window of a home from which two other wounded officers managed to escape.

Clinton Officer Christopher Ryan Morton is heard saying “I don’t know if I can move my feet” after gunfire erupted Tuesday night when he and the other wounded officers were sent to the wrong house while responding to a 911 call made from another town, according to captured police scanner communications. The suspected gunman, James Waters, barricaded himself inside the home after the initial hail of gunfire and then fired at the dozens of officers who rushed to the scene, refusing to let them tend to Morton, The Kansas City Star reported.

After Morton stopped responding, an officer pleaded, “Morton, stay with us. Stay with us, Morton.”

By the time law enforcement made it back into the home hours later, Morton and Waters were dead.

Investigators were still trying to determine if Waters shot himself or was killed by police, Missouri Highway Patrol Sgt. Bill Lowe said. The wounded officers were Nathan Bettencourt, who was in stable condition Thursday, and Nicholas Kasper, who was treated for gunshot wounds and released.

Sheryl Long, one of the neighbors who witnessed the gun battle, said she the officers begged Waters during the standoff to let them tend to their fallen colleague.

“They kept calling his name,” Long said. “It was very sad, so senseless.”

Whoever placed the 911 call didn’t speak to the dispatcher, but two women could be heard arguing in the background, so officers were sent to check on the disturbance, Lowe said. For reasons that authorities are still trying to determine, the officers were sent to the Clinton home instead of the home from where the call was made, which was about 15 miles (24 kilometers) away in Windsor.

Waters had been in and out of prison since 2000, mostly for drug-related convictions and appeared to still be dealing drugs.

Tammy Widger, 37, was taken into custody at the scene of the shooting and charged with possession of methamphetamine with intent to deliver and maintaining a public nuisance. Online court records don’t list an attorney for Widger, who is being held on a $25,000 bond.

In a probable cause statement, Patrol Sgt. Brian Hagerty wrote that Widger told a fellow investigator that she helped Waters deal meth in exchange for him paying her bills.

Waters’ cousin, John Rudolph, told KCTV that Waters was troubled and “mental issues,” and that despite his criminal history, he managed to get guns.

He also expressed his condolences to the slain officer’s family.

Morton’s friend, Aiza Evans, told The Star that Morton knew the dangers of police work but was very patriotic and “passionate in everything he did.”

Morton, a twice-deployed veteran who joined the Army National Guard in 2005, took a temporary break from full-time policing last year to take a job with Veterans Affairs in the Kansas City area, although he remained a reserve officer in Clinton. The break ended after a gunman fatally shot another Clinton officer, Gary Michael, in August.

Morton said in a social media exchange with Evans that Michael “fought til (sic) the end.” Morton, who replaced Michael on the force, said he was “Just trying to help the PD heal now.”