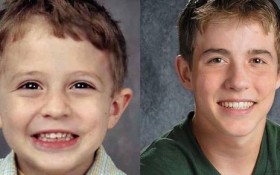 Police say a 5-year-old child who disappeared 13 years ago in Birmingham, Alabama, has been found in Ohio.

Authorities told news outlets that Julian Hernandez, who’s now 18-years-old, was found in Cleveland. He was reported missing by his mother in 2002.

His father, 53-year-old Bobby Hernandez, was arrested in Ohio and charged in connection with the abduction. He’s also facing charges in Alabama.

Special Agent Vicki Anderson of the FBI’s Cleveland, Ohio Division says they received information Oct. 30 that a local teenager may be a missing child from Alabama.

Federal agents contacted the Vestavia Hills Police Department, as well as the National Center for Missing and Exploited Children and Birmingham FBI office, to help confirm the teen’s identity.