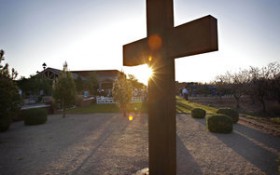 A miracle may have just occurred in Utah, right in time for Christmas.

According to reports, the Catholic Diocese of Salt Lake City is investigating a Communion wafer that turned red in water, an event known as a “bleeding host” that many consider a miraculous sign from God.

Church officials told the Salt Lake Tribune on Thursday that the event happened after Holy Communion at Francis Xavier Church in Kearns on Nov. 8.

Diocese spokeswoman Susan Dennin says the wafer wasn’t eaten during the service. In accordance with Church practices, it was placed in an ablution bowl to dissolve, which usually happens in just a few minutes.

Instead, the wafer, or host, turned a dark red color over the next several days.

“Recently, reports of a bleeding host at St. Francis Xavier Church in Kearns have been circulating within the diocese. Monsignor Colin F. Bircumshaw, Diocesan Administrator, has appointed an ad hoc committee of individuals with various backgrounds to investigate the matter. The work of the committee is now underway. The results will be made public.

The host is now in the custody of the Diocesan Administrator. Contrary to rumor, there are NO current plans for public exposition or adoration.

Whatever the outcome of the investigation, we can use this time to renew our faith and devotion in the greatest miracle — the Real Presence of Jesus Christ that takes place at every Mass.

You can see the picture of the reported miracle below, as reported by FOX13 Salt Lake City: