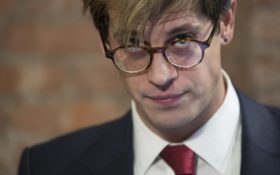 Milo Yiannopoulos is dropping his lawsuit against his former publisher.

In papers filed Tuesday in New York State Supreme Court, Yiannopoulos and Simon & Schuster asked that the case be dismissed “without costs or fees to either party.” The far-right author and agitator sued for $10 million last summer after the publisher canceled the release of his memoir “Dangerous.” Simon & Schuster acted after video clips of Yiannopoulos surfaced in which he appeared to defend sexual relationships between men and underage boys. Yiannopoulos alleged breach of contract and said the publisher gave in to “false and misleading reports.” Simon & Schuster had called the suit a publicity stunt.

Last fall, a judge allowed the case to proceed after Simon & Schuster had asked that it be dismissed. But in January, Yiannopoulous’ legal counsel withdrew and the author announced that he would represent himself.

In a Facebook posting Tuesday, Yiannopoulos said ending the suit was a “tough decision” but the “right one.” He wrote that “it was always going to be hard to prove damages, as anyone who has ever hired a ‘damages expert’ will know.”

“I don’t want to spend all the money I made from my book, and the next two years of my life, on a lawsuit,” he wrote on Facebook.