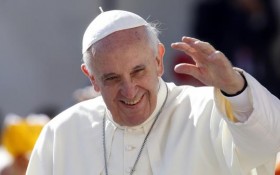 An estimated 1.4 million people are expected to attend a mass officiated by Pope Francis when he visits Kenya on his first trip to Africa, Catholic church officials and Kenyan authorities said Sunday.

The pope’s visit to Kenya on Nov. 25 to 27 — the first stop in his three-state visit of Africa— will see the pontiff talk about strengthening families, inter-ethnic tolerance and inclusivity, presidential spokesman Manoah Esipisu said.

The pope will also discuss climate change when he meets with diplomats at the U.N. Environment Program headquarters in the Gigiri area of Nairobi, which will come a few days before the U.N. climate change conference in Paris, said Esipisu.

The Catholic church expects its 1,000 parishes in Kenya to bring at least three buses of pilgrims, for the mass on Nov. 26 at the grounds of the University of Nairobi, which will have 9,000 priests and clergymen, Bishop Alfred Rotich said.

Security arrangement will include 10,000 police officers and additional 10,000 members of the National Youth Service will be used for crowd control.

Kenya has faced a wave of extremist attacks from neighboring Somalia’s Islamic extremist rebels of al-Shabab since it sent its troop to Somalia to bolster the western-backed government against the militants’ insurgency.

In nearly all of the attacks non-Muslims have been targeted and Christian churches have also been raided.

Pope Francis will also visit Uganda and the Central African Republic on Nov. 28 through 30.