Millions brace for snow storm. Here’s what to expect. - The Horn News 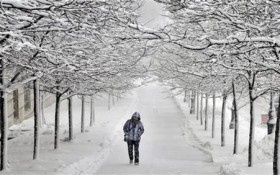 The second winter storm in four days to hit the Northeast is expected to bring blizzard conditions to southeastern Massachusetts on Monday and leave behind as much as 18 inches of snow.

Snow from the storm bearing down on New England could last into Tuesday, when New Hampshire’s first-in-the nation presidential primary is held. It’s accompanied by high winds that could gust up to 65 mph in the hardest hit areas and bring power failures.

Much of the rest of Massachusetts, Rhode Island and most of Connecticut are under a winter storm warning and could get as much as 10 inches of snow, according to the National Weather Service. A coastal flood warning has also been issued.

Northern New England down to the New York and New Jersey areas are expected to get much less snow. New York City, Philadelphia and northern New Jersey could get from 2 to 3 inches between Monday and Tuesday night, the weather service said.

Communities expecting to be hit by the worst of the storm closed schools Monday and issued on-street parking bans.

Baker urged drivers to stay off the roads if possible. The Monday morning commute around Boston was lighter than normal.

The Massachusetts Bay Transportation Authority, which was crippled by a series of historic storms during Boston’s record-breaking winter last year, was operating on a normal weekday schedule with winter routes in effect for buses.