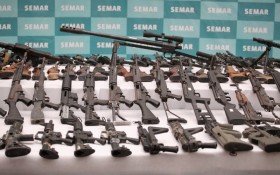 Over a dozen high-powered military weapons were stolen in a brazen weekend break-in to an Army Reserve Center armory in central Massachusetts, according to an FBI spokeswoman.

Though authorities haven’t yet determined exactly when or how the break-in occurred, early reports are that recent construction at the center may have disabled the alarm system. And there is speculation that the theft, at least on some level, may have been an inside job.

Kristen Setera said the Boston FBI became aware of the break-in at the Lincoln Army Reserve Center in Worcester on Sunday.

Setera says, “Every effort will be made to recover these weapons immediately.”

The break-in was first made public during a press conference with Massachusetts Gov. Charlie Baker. State Police referred questions to the FBI.

This isn’t the first time that military equipment had been stolen from a military compound in the United States. Earlier this year, two soldiers were officially accused of stealing high-tech surveillance equipment worth $187,000 from Fort Carson and selling at least some of it on eBay, according to reports.