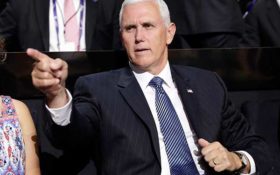 It’s time to end the distraction and get on with governance, Pence told a surprised NBC News interviewer.

“What I think is that it’s been about a year since this investigation began. Our administration has provided over a million documents, we’ve fully cooperated in it and in the interest of the country, I think it’s time to wrap it up,” Pence said in a recent appearance on the “Today Show.”

Pence spoke to the mainstream media following the stunning release of three Americans held by North Korea, negotiated by President Donald Trump as part of the denuclearization efforts for the Korean peninsula.

Trump has fumed that the Mueller’s probe is a partisan “witch hunt” and a “hoax” meant to undermine his administration. Pence, a career politician, was more diplomatic than the famously brash Trump.

“I would very respectfully encourage the special counsel and his team to bring their work to completion,” Pence said.