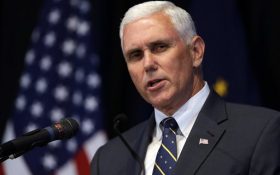 Vice President Mike Pence has announced that the U.S. embassy in Israel will be moving by the end of 2019.

Pence made the announcement at the Israel parliament on Monday. It marked the highlight of Pence’s three-day visit to Israel. The plan to barrel ahead with accelerating the move to Jerusalem received a rousing ovation from the crowd.

“Jerusalem is Israel’s capital and as such President Trump has directed the State Department to immediately begin preparations to move the United States embassy from Tel Aviv to Jerusalem,” he said.

Naturally, Palestinians claimed to be outraged by Pence’s speech. Chief negotiator Saeb Erekat said it “has proven that the U.S. administration is part of the problem rather than the solution.”

The Vice President is hoping that Palestinians would re-enter negotiations. “Our message to President (Mahmoud) Abbas and the Palestinian Authority is the door’s open. The door’s open. President Trump is absolutely committed to doing everything the United States can to achieve a peace agreement that brings an end to decades of conflict.”

The new embassy will be opened in an existing U.S. facility and will be retrofitted to meet safety and security requirements.

Secretary of State Rex Tillerson has not yet signed off on the plan, but will do so in the upcoming weeks it has been reported.

It is not yet clear the exact date next year the embassy will be moved. The likely location will be in Jerusalem’s Arnona neighborhood  in a U.S. building that currently handles U.S. consular affairs.

Palestinians protested Pence’s announcement and his visit by burning posters with his image.

Pence has said that the U.S. would only back a two-state solution is both sides supported it.