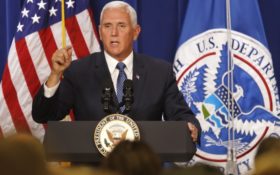 In an address at ICE headquarter infused with electoral politics, Pence noted that some prominent Democrats had called for the abolition of ICE, the agency charged with detaining and deporting migrants entering the country illegally. He said President Donald Trump would fully support immigration enforcement agents and warned that the abolition of the agency would lead to violent crime and human trafficking.

“It isn’t just the expression of the radical left that has been speaking out against ICE. The truth is that opposition of ICE has moved to the center of the Democratic Party itself,” Pence said in a speech to ICE employees. “Just when you thought the Democrats couldn’t move farther to the left, leading members of the Democratic Party, including candidates for higher office, are actually openly advocating the abolition of ICE.”

“The American people have the right to their opinions, but these spurious attacks on ICE by our political leaders must stop,” Pence said.

The dispute over the federal agency has emerged as a political fault line after the Trump administration began separating migrant children from their parents after they crossed the U.S.-Mexico border, leading to nationwide protests last weekend. Trump has made border security a focus of his message as he aims to prevent a Democratic takeover of Congress in the November midterm elections.

Pence made no mention of the Trump administration’s “zero tolerance” policy or the caring for unaccompanied children, who are overseen by the Department of Health and Human Services. As the vice president was greeting ICE employees after the speech, he did not respond to a shouted question from a reporter asking if separating children “was a Christian thing to do.”

ICE has come under fire from Democratic Sens. Kirsten Gillibrand of New York and Elizabeth Warren of Massachusetts and New York City Mayor Bill de Blasio, who are among a large field of potential 2020 challengers to Trump.

Gillibrand has said ICE is not “working as intended” and said the criminal justice aspect of the agency should be separated from immigration issues. Warren has called Trump’s immigration policies “immoral” and said the U.S. needs to rebuild its immigration system “from top to bottom, starting by replacing ICE with something that reflects our values,” while de Blasio has said ICE’s time “has come and gone.”