Mike Huckabee just compared Trump to... WHO!? - The Horn News 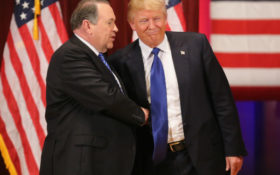 As he watched the movie “The Darkest Hour,” former Arkansas Governor Mike Huckabee was reminded of what a true leader looks like — and it looks a lot like President Donald Trump.

Huckabee tweeted on Tuesday that he could not help but notice very similar traits between the former British Prime Minister Winston Churchill and Trump. Churchill was famous for his “never quit” attitude that flew in the face of pacifists that urged a surrender to Nazi Germany during World War Two… and he was hated by the media and liberals for it.

Would you kneel? [sponsored]

Liberals also freaked out when Huckabee commented on the comparison between former British Prime Minister Neville Chamberlain and former President Barack Obama, both of whom have been criticized for offering appeasement to bullies.

Ducks took day off today but if you can get to a theater go see The Darkest Hour about Churchill. Reminds as to what real leadership looks like.

Churchill was hated by his own party, opposition party, and press. Feared by King as reckless, and despised for his bluntness. But unlike Neville Chamberlain, he didn't retreat. We had a Chamberlain for 8 yrs; in @realDonaldTrump we have a Churchill.

As Huckabee described, Churchill’s straight-forward, “get tough and fight” attitude was heavily criticized by career politicians and the British media.

Does that remind you of anyone?

In his first year, Trump has pushed forward new tax reform laws and boasts of major accomplishments — and the media hates him for it.

Liberals want a leader that bows to foreign globalists, not one that stands up to them. They want a president that opens our borders and apologizes for America, not a leader that stands for “America First” and demands our allies do their fair share.

As for Chamberlain, Churchill’s predecessor, he was historically known for rolling over and surrendering Czechoslovakia to Nazi Germany — and Huckabee is right, that also reminds us of someone.

Still, social media users did not appreciate the comparison between Chamberlain and Obama.

Obama not only got enemy #1 OBL, he did so while rhetorically destroying Donnie at the correspondents' dinner. Meanwhile your Dear Leader can't even criticize his bff Vladimir, much less impose Congressional sanctions against him, so, um No.

Comparing Donald Trump to Winston Churchill establishes Mike Huckabee as a history ignoramus for the ages. What a clown.

Huck, you are officially brainwashed. Because I know you’re not stupid. It’s mind blowing how well Trump wears that “mask of sanity” but it is a mask. And he has a smart man like you buying it

Isn’t it a shame that these idiots voluntarily buy the lies that the media and liberal leaders feed them?

What kind of leader do YOU want for America?

Do you want a Winston Churchill, or a Nevile Chamberlain for America?