Migrants demand to be relocated.... because of ghosts! - The Horn News 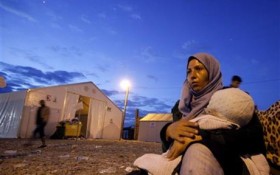 Sweden’s migration agency says 35 asylum-seekers have asked to be relocated from a refugee center because they believe it’s haunted by ghosts.

Migration Agency officials said Wednesday the asylum-seekers were spooked by flickering lights and noise in the plumbing system at the facility in Grannaforsa, a small village in Smaland province.

Magnus Petersson, the local Migration Agency manager, said 35 of the 58 people living in the shelter came to the agency’s regional office Tuesday, demanding to be relocated.

Petersson said they reluctantly returned at the end of the day after being told there were no alternatives.

He says there were probably natural explanations to the phenomena that frightened them, such as faulty electrical switches and creaking noises caused by rapid changes in temperature.