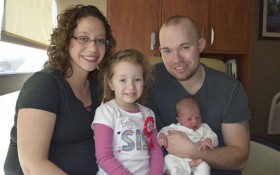 A southeastern Michigan couple is celebrating the unique occurrence of both their children being born on Leap Days.

“I haven’t ever delivered a baby on the same date as an older sibling; it’s quite the miracle,” said nurse midwife Maureen Heinz, who helped with Evelyn’s natural birth. “It’s not something they tried or planned to do, and she wasn’t induced. It was all by chance.”

The couple’s other daughter, Eliana Adaya, was born on Feb. 29, 2012, the last Leap Day, at Henry Ford West Bloomfield Hospital.

“I didn’t expect the possibility of them being born on the same day, let alone on Leap Day, until I went into labor yesterday at church,” said Melissa Croff in a statement released Monday by Henry Ford Macomb Hospital.

She told the Macomb Daily News that both of her girls were born at almost the exact same time and that the difference was less than 30 minutes.

The couple didn’t comment on which date the children will celebrate their birthdays during non-Leap Years.

The Guinness World Records listing for the most siblings born on the same day is five on Feb. 20. The odds of that happening are about one in 17.8 billion.