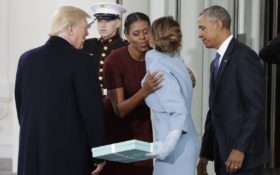 But the formal exchange on the day President Donald Trump took the oath of office was a little awkward, Mrs. Obama told Ellen DeGeneres in remarks broadcast Thursday. Mrs. Obama recalled that after Mrs. Trump gave her the gift on the White House front steps, “No one would come and take the box” so that it would not appear in photos.

Finally, Mrs. Obama said, her husband, the outgoing President Barack Obama, took the gift inside and photos were taken.

Mrs. Obama also gave DeGeneres gag birthday gifts, including a “Chia Obama” — a figure of the former president’s face that grows a plant in place of hair.