Mexico's election victor reaches out to Trump for... - The Horn News 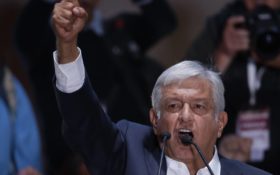 Lopez Obrador said in an interview Monday with the Televisa news network that Trump’s Tweet Sunday night “was very respectful. That is what we always want to maintain with the U.S. government, that there be mutual respect.”

Trump tweeted Sunday that “I look very much forward to working with him. There is much to be done that will benefit both the United States and Mexico!”

“We are never going to disrespect the U.S. government, because we want them to respect us,” Lopez Obrador said. “At the appropriate moment, we are going to get in touch, to reach an understanding” with the Trump administration.

“We are conscious of the need to maintain good relations with the United States,” he added. Lopez Obrador had been compared to Trump for his populist, nationalist rhetoric and sometimes touchy personality — as well as his past skepticism about the trade deal.

But Lopez Obrador said he supports reaching a deal on renegotiating the North American Free Trade Agreement with the United States and Canada. The talks have been stalled over the Trump administration demands for higher U.S. content and a “sunset clause” in the 1994 trade agreement.

Lopez Obrador said he will propose that his own team of experts be included in the talks. The winning candidate said he will make that proposal in a meeting Tuesday with current President Enrique Pena Nieto.

Lopez Obrador told Televisa that he will respect the current team of negotiators, and let them continue representing Mexico until he takes office Dec. 1.

Lopez Obrador said he wants to have information on what’s being discussed and “to help as much as we can.”

With just over half of votes counted on Monday, Lopez Obrador had about 53.7 percent of the votes, a remarkable margin not seen in the country for more than three decades.

A prominent exit poll predicted his party allies were poised to score big victories in congressional and governorship races.