Mexico jetliner crashes and burns, all aboard escape alive - The Horn News 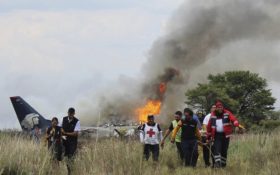 An Aeromexico jetliner crashed while taking off during a severe storm in northern Mexico on Tuesday, smacking down in a field nearly intact then catching fire, but officials said everyone on board escaped alive.

Gov. Jose Aispuro, who had initially reported there were no deaths but later said authorities were searching the charred Embraer 190 to make sure, announced late Tuesday that “no person has died.”

He said the pilot and one other person were in serious but stable condition. Earlier, he said a total of 49 people had been taken to hospitals, and officials said most had minor injuries.

“Fortunately we have now found all 103 — now we know where each one is — this gives us a lot of tranquility,” Aispuro said.

The federal government earlier said 101 people were on the plane, 97 passengers and four crew members. But the governor said two minors had not been included in the first tally.

The state civil defense office published photos of a burning but relatively intact plane lying on its belly in a field. Ambulances lined up at the accident site to ferry the injured to hospitals. The governor said some passengers got out under their power, and some even wandered back to the nearby airport of Durango city to seek out relatives.

Officials and witnesses differed on whether the plane either fell shortly after takeoff or ran off the runway without really gaining altitude. But they agreed the plane was trying to take off during a storm, with some describing marble-sized hail.

The governor said a gust of wind hit the plane shortly after it took off, causing the jet to lose speed and hit the ground with its left wing, knocking both engines loose. He said the plane skidded into a field in a horizontal position, which allowed escape slides to activate so all passengers and crew could escape before the plane caught fire.

Israel Solano Mejia, director of the Durango city civil defense agency, told Foro TV that the plane “made it off the ground, but fell nose-first” just a few hundred yards from the end of the runway.

“The nose took the hit. The most seriously injured is the pilot,” Solano Mejia said. However, he said, “the majority of passengers left (the plane) under their own power.”

The federal Transport Department office said in a press statement that the airplane “suffered an accident moments after takeoff,” but gave no information on the possible cause.

Aeromexico said the flight was AM2431 from Durango to Mexico City.

The web site Planespotters.net said the Brazilian-made medium-range Embraer 190 was about 10 years old and had seen service with two other airlines before joining the Aeromexico fleet.

Operations were suspended at Guadalupe Victoria airport after the crash.