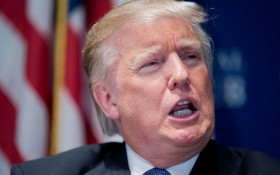 Yet the government continues to require Trump to provide his own security detail.

Guzman, the notorious cartel leader who brazenly escaped from Mexican jail earlier this summer, called for the assassination of Trump because he is reportedly furious at the presidential candidate’s controversial stances on immigration and border control.

Before his brazen jailbreak earlier this summer, Guzman was already ranting about Trump. TelesurvTV, a Mexican language news site, quotes an unnamed former acquaintance as saying that Guzman, “was mad. He wants Donald Trump dead and will pay any amount of money to have Donald Trump’s head.”

According to TelesurvTV and other outlets, the bounty price has apparently risen to $100 million.

Guzman is reportedly worth well more than $1 billion, although his exact net worth is difficult to determine.

This isn’t the first time the Mexican drug lord has threatened Trump. In July, through a Twitter account administered by Guzman’s son Ivan, the drug lord wrote in Spanish that he was going to make Trump swallow his words, before calling him a homosexual slur.

Trump isn’t backing down, however, and earlier this summer promised to “kick [Guzman’s] ass” if he were elected president.