Melania's fashion stays true to her roots - The Horn News 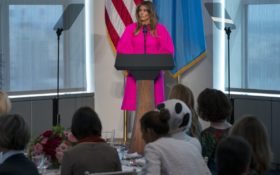 Slovenian-born Melania Trump has been unafraid to stay true to her roots, if there’s a message to be taken from her bold, foreign-flavored wardrobe in 2017.

In her first year as first lady, Mrs. Trump has often wrapped herself in the clothes of her home continent.

The first first lady to be born in continental Europe, Melania grew up in Sevnica in Slovenia, in the southern Balkans, just over 100 kilometers (60 miles) from the Italian border. Her first real taste for fashion came while living in Paris as a young model in the mid-1990s, years before she got U.S. citizenship in 2006.

From designs by Dolce & Gabbana, Del Pozo, Christian Dior, Emilio Pucci, Givenchy and Valentino to daringly high Christian Louboutin heels, the 47-year-old first lady’s touchstones have not only been the Old World, but its most established design houses.

Since becoming first lady, Mrs. Trump has chosen Herve Pierre, a French-born immigrant, as her fashion adviser. Politics be damned: He’s helped her hone looks that emphasize the sleeve, eye-popping colors and big sunglasses, and show off her svelte, 5-foot-11 frame and thick, dark hair.

“In the news, we speak a lot of politics, so if for a moment we can forget about it and enjoy something else, why not?” Pierre told AP.

Mrs. Trump’s old-school, dressed-to-the-nines glamour and full fabrics evoke distance not only in how far the clothes have had to travel, but in perceptions that the first lady, who only moved to the White House in June and rarely speaks publicly, is reserved in her persona.

Not since Jackie Kennedy has a U.S. first lady had such a European aesthetic as Mrs. Trump.

Although she wore Ralph Lauren to the inauguration and has also shown a penchant for U.S. brands such as Michael Kors and Calvin Klein, many of her most recognizable looks have been foreign designed and assembled.

Walking the path of both foreign and highly priced glamour presents its share of risks for any first lady. (Mrs. Kennedy was criticized for wearing Parisian stalwart Chanel.)

But in an “America First” administration, Mrs. Trump is particularly vulnerable to criticism as her husband assails immigration and plays to blue-collar supporters.

While the fashion press gushed over a brightly colored, floral D&G silk coat Mrs. Trump wore in Sicily in May, political commentators didn’t have such a rosy view of the garment’s over-$50,000 price tag.

It cost, they quickly pointed out, more than the average annual U.S. household income. Mrs. Trump was criticized for a Marie Antoinette-style wardrobe as the president’s ill-fated attempt to repeal “Obamacare” was being considered, an effort that might have stripped millions of people of their insurance.

She was praised for getting it right when she wore $50 converse sneakers and $185 J Brand jeans (despite the $1,100 Balmain shirt) during a day spent digging around the White House vegetable garden with children.

It’s an impossible game to win.

Mrs. Obama was criticized for wearing $540 Lanvin sneakers at a food bank in Washington — despite twinning them with a more affordable J.Crew cardigan.

Rosalynn Carter was berated during the 1970s oil crisis for being too unglamorous when she wore an off-the-rack gown to the 1977 inaugural ball, after having worn it to a previous ball.

If there’s a message in Mrs. Trump’s fashion — it’s that she dresses to look good, in keeping with the expensive personal taste she’s acquired since marrying Trump in 2005. Political meaning isn’t part of the equation.

“She does not concern herself with what others think about her fashion and always stays true to herself,” Stephanie Grisham, a spokeswoman for the first lady, told AP. “Mrs. Trump wears what she likes, and what is appropriate for the occasion.”

Adds Pierre, via email: “She has and had already a very personal style in fashion, before she was first lady. As you can see she likes suits and structured dresses, I work keeping her vision in mind.”