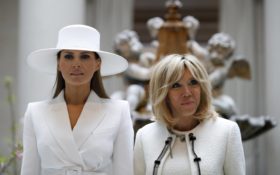 First lady Melania Trump in a wide-brimmed white hat, and stilettos strolled through National Gallery of Art’s exhibit of about 60 portraits by the French post-impressionist painter.

A pair of designers is responsible for Melania Trump’s white skirt suit and matching hat.

Mrs. Trump also wore the suit on an outing to the National Gallery of Art in Washington with Mrs. Macron.

The white hat quickly became the talk of the town, as well as on Twitter. Mrs. Trump typically doesn’t wear hats.