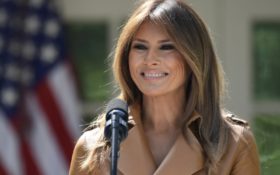 First Lady Melania Trump hit the road again on Wednesday for her “Be Best” campaign by visiting newborns at Jefferson University Hospital’s neonatal care unit to learn about babies who were born dependent on opioids.

The first lady’s trip was delayed on Wednesday because of smoke in the cabin of her plane, but after a quick plane switch, Melania was able to make the trip to Philadelphia.

Melania used her productive visit to shine a light on the epidemic by visiting with the mothers who are currently in addiction treatment, and by also visiting with the children who are being treated for suffering withdrawals.

When the first lady arrived at the Jefferson University Hospital, she was first taken on a tour of the care unit to become educated on the treatment that newborns suffering from opioid withdrawal are given.

She also spoke at a conference for the National Convening on Neonatal Abstinence Syndrome where she was first introduced by Health and Human Services Secretary Alex Azar. He said the administration plans on fighting the opioid epidemic “driven by the best science we’ve got.”

Melania began her remarks by saying, “As the caretakers of the next generation, it is our responsibility to protect our most valuable and vulnerable, our children.”

After speaking at the conference and touring the care unit, Melania met with several mothers who are currently in treatment for opioid addiction. The treatment program allows for the mothers to have their children with them.

“There are few things harder to bear than seeing a newborn suffer,” Melania told the group, “and I’m anxious to do all that I can to help shine a light on this epidemic.”

The first lady also took time to visit the children who are being treated for serious conditions.

With a smile on her face, she touched held a baby in her arms and she reached over to touch a baby lying asleep in their crib.

Thank you Thomas Jefferson University Hospital for a productive visit. The MATER program is a prime example of how we can provide help to mothers & babies w/ NAS. I’m looking forward to learning more about @hhsgov developments for a new tracking system. #BeBest pic.twitter.com/RmZarIo3qW

Melania has visited several hospitals since announcing her “Be Best” campaign, making opioid addiction a focus of her initiative.

In July, the first lady flew to Nashville, Tennessee to visit the Monroe Carell Jr. Children’s hospital at Vanderbilt and took part in a round table discussing possible treatments for the youngsters.