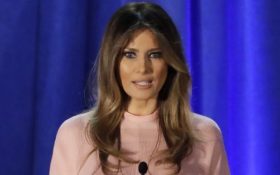 After launching her anti-bullying campaign in May, first lady Melania Trump has made it clear that she will not back down to her harassers.

On Tuesday, the first lady made a bold move in calling out the bluff of liberal actress, Issa Rae, who claimed she would cancel her show if Melania liked it.

Through her spokeswoman, Stephanie Grisham, the first lady alerted Rae that she was indeed a fan of her HBO show, “Insecure.”

In a recent interview with Glamour magazine, Rae reflected on the time she found out that former first lady Michelle Obama was a fan of her show.

“It was like talking to my auntie. It bums me out that I will never have that feeling again of the First Family f****ing with us so hard and getting us,” Rae said.

Rae then added, “If Melania [Trump] said that to me, I would be like, ‘Well, I guess it’s canceled. We’re not making this show. It’s not ours anymore.’”

The liberal actress claimed that her so-called ‘joke’ was just meant to be funny… but Page Six picked up her slam against the first lady and ran the story.

While it remains unclear if Melania was being serious or not about liking the show — it should be crystal clear to all the nasty liberals out there that the first lady will not be backing down against their attacks.

After all, her platform, “Be Best” was launched to tackle these types of bullying issues.

–-Kylie Handler is a news editor for The Horn News