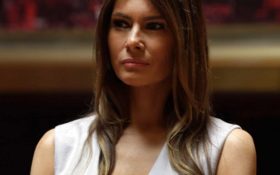 After celebrity loud-mouth Rosie O’Donnell shared an outrageous, false video implying that President-elect Donald Trump’s youngest son has undiagnosed autism, the American public was appalled and called out the video as inappropriate by any measure.

First Lady-elect Melania Trump had her own response — she sent her fierce legal team to deal with the issue, and the YouTuber behind the controversial video is scrambling to apologize.

“This law firm represents First Lady–elect Melania Trump and her 10-year-old son, Barron Trump. A video was posted at YouTube recently speculating that Barron might be autistic. He is not,” Harder of Harder Mirell & Abrams LLP in Los Angeles told US Weekly. “The video includes the hashtag ‘StopTheBullying’ but yet the video itself is bullying by making false statements and speculation about a 10-year-old boy for the purpose of harassing him and his parents.”

Within hours, the man behind the original speculation took down the video, retracted it, and replaced it with a video of his public apology.

“I never ever meant this as a bullying video,” James Hunter, the man behind the video, wrote. “As someone who was diagnosed at age 5 and has gone through bullying myself, I would NEVER do something like that. I made this because I truly believed Barron was on the spectrum, and I wanted people to stop bullying him over his ‘weird’ behavior and explain to them that it might actually be due to a condition. … I have a great respect for [Melania] and her family. I never meant to hurt anyone.”

“The video regarding Barron Trump has been removed, and the person who posted it has retracted it and apologized for it, at the same YouTube page,” Melania Trump’s lawyer told reporters of their victory.

Editors note: The Horn News believes that autism is nothing to be silent about, and also understands the condition is NOT a negative thing. But it is our firm belief that baseless speculation on a 10-year-old son of a politician — no matter what — is inappropriate in every way.

For more information on Autism, including how to donate to research and diagnosis, we recommend the organization Autism Speaks.