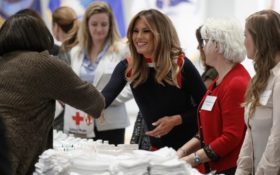 While serving as first lady, Melania Trump earned a reputation for maintaining her own privacy. Now she’s emerging to support charitable causes, for the first time since leaving the White House.

On Thursday, Trump unveiled her plans to commission an artwork, sell it, and donate the proceeds toward children aging out of foster care.

Trump’s office described the work as a press release. “‘Melania’s Vision’ is a breathtaking watercolor art by Marc-Antoine Coulon, and embodies Mrs. Trump’s cobalt blue eyes, proving the collector with an amulet to inspire.”

Trump plans to auction the physical piece in January 2022.

She wrote in a statement, “We will provide children computer science skills, including programming and software development, to thrive after they age out of the foster community.”

In addition to the auction, Trump plans to sell digital copies of the work for 1 SOL, a unit of currency equal to about $150.

According to the press release, she’s selling the digital copies as NFTs.

A non-fungible token (NFT) is an image file stored on a digital ledger. Consumers can buy the file, and they can prove ownership of it by consulting the ledger, called the “blockchain.” Consumers interact with cryptocurrency the same way, by pointing to the blockchain to prove ownership of a currency unit.

However, an NFT can be viewed and downloaded without being bought. For this reason, NFTs have been both praised a way to support artists financially and criticized as a waste of money.

The NFT market has also faced criticism for charging hidden fees and for consuming too much electricity. Plus, NFTs are often too large to store on the blockchain, and they’re easy to counterfeit.

NFTs date back to the early 2010s. However, they remained obscure until February of this year, when the artist Mike “Beeple” Winkelmann sold one for $65 million. Winkelmann’s NFT made headlines as the fourth-most expensive work by any living artist.

Now, the former first lady is jumping into that market.