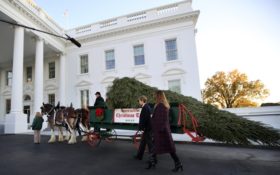 A military band quartet played holiday tunes as a horse-drawn wagon carried the 19 1/2-foot Balsam fir from Wisconsin up the White House driveway.

The first lady, wearing a holiday red turtleneck and a coat draped over her shoulders, and Barron, in a dark suit coat, white shirt and dark slacks, emerged from the North Portico.

They circled the tree and walked over to Jim and Diane Chapman, who presented it. The Chapmans own a Wisconsin Christmas tree farm and won an annual contest sponsored by the National Christmas Tree Association.

“This is a beautiful tree. Thank you so much. We will decorate it very nicely,” the first lady told the Chapmans and other members of their family on Monday. “I hope you can come and visit with us.”

The White House chief usher, who oversees the residence, and the grounds superintendent picked out the tree during a September scouting trip.

After Mrs. Trump and Barron gave their symbolic approval, the tree was carefully carted off to the Blue Room where, after a slight trim and the removal of a monstrous chandelier, it will become the holiday showstopper for a president who has vowed to put Christmas back in the center of the winter holidays.

During last year’s presidential campaign, Trump railed against the preference for saying “Happy Holidays” instead of “Merry Christmas,” characterizing it as a “chipping away at Christianity.”

Invitations to dozens of holiday parties are going out. The subject line of one emailed invite references a White House “Christmas reception,” while the language of the invitation itself refers to a “holiday reception.”

The tree usually arrives the day after Thanksgiving, but was delivered early this year to accommodate the Trumps, who are spending the holiday at their estate in Palm Beach, Florida.

While the Trumps are away, a small army of volunteers, decorators and florists from around the country will descend on the White House on Friday and spend the holiday weekend transforming every inch of the 132-room mansion for Christmas, complete with a tree in every public room.

The White House food kitchen and pastry kitchen will go into overdrive preparing all of the food and cakes, cookies and pies that are typically served at the parties, along with the gingerbread White House — which is on display for weeks and never served.

The first lady tweeted last week, after she returned from accompanying the president to Japan, South Korea and China, that the souvenir Christmas booklet for tourists and party guests is being printed.

“Excited to receive the beautiful tree Monday!” she said.