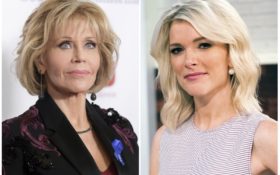 NBC’s Megyn Kelly has proven that she has no problem embarrassing her guests and creating some very cringe-worthy moments on her struggling show, “Megyn Kelly Today.”

But it’s gotten so bad, even far left liberal celebrities like Jane Fonda — also known as Hanoi Jane — can’t stand Kelly. Back in September 2017, Kelly had Fonda on her show. The interview went from bad to worse… and the two liberal losers are still fighting about it months later.

Fonda slammed Kelly’s work in a recent interview with Variety, and Kelly was not happy about the criticism.

Fonda took a second to grasp what was actually asked of her — and then came the response that Kelly was not expecting.

“We really want to talk about that right now?” Fonda shot back.

You can watch the awkward exchange here —

In her interview with Variety, Fonda unloaded on Kelly. “It wasn’t like I was upset. I was stunned. It was so inappropriate. It showed that she’s not that good an interviewer. But if she comes around and learns her stuff, sure,” she said.

Kelly responded by playing her own victim card… as usual.

“But I have no regrets about the question,” Kelly said. “Nor am I in the market for a lesson from Jane Fonda on what is and is not appropriate. After all, this is a woman whose name is synonymous with outrage.”

It didn’t stop there.

“It’s time to address the poor-me routine,” Kelly said. “First, some context. Fonda was on to promote a film about aging. For years she has spoken openly about her joy in giving a cultural face to older women.”

Kelly is an expert in the ‘poor-me routine,’ however. She has tried to play a victimized woman in her industry many times.

These two liberal celebrities know-it-all, victimized attitudes are exactly why America is fed up with Hollywood.

Time to tune these losers out — for good.