Meet the courageous "Lion Guards" of Africa - The Horn News 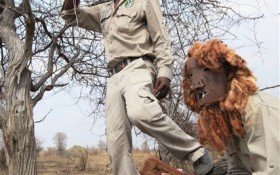 Standing just 20 feet from a fearsome lion, Charles Tshuma was armed with only a plastic horn. He and some neighbors blew these horns to frighten away the lion, but the big cat did not budge.

So they kept blowing their horns and shouting and screaming until the lion turned away and ambled back into Hwange National Park, leaving Tshuma’s rural community.

“Sometimes people in the village do not want to join in to chase away the lions, choosing instead to lock themselves indoors,” he said.

That is the life of Zimbabwe’s lion guards, brave community members selected and trained to prevent attacks on humans and cattle by big cats who stray from the unfenced Hwange park, which sprawls over 14,500 square kilometers (5,625 sq. miles) in western Zimbabwe.

The killing of Cecil the lion by an American hunter near Hwange park in July caused international outrage. But the biggest threat to Hwange’s more than 500 lions is conflict with surrounding cattle farmers, say researchers. The innovative lion guard program is designed to protect both humans and lions. 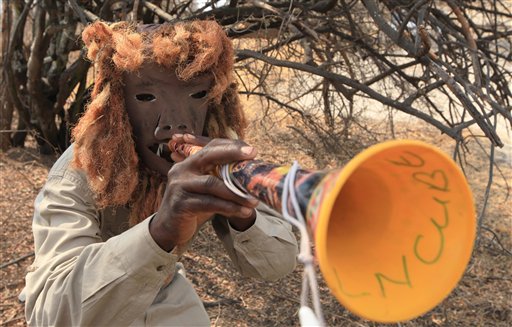 Oxford University’s Lions Research Project has tracked and studied over 30 lion prides (families) in its 15 years here. Seeing many attacks by lions wandering out of the park, the researchers in 2007 launched the Long Shields program to reduce lion-human conflicts.

Since then, there has been a 40 percent decline in those conflicts, according to Brent Stapelkamp, a researcher with the Oxford project. Many of Hwange’s lions have collars with satellite tracking devices so the researchers can inform surrounding villages when and where lions have left the park.

Equipped with mountain bikes, mobile phones and a GPS tracker, the guards go to the area to turn back the straying lions. They blow their vuvuzelas and alert other members of the community. People then gather, carrying whips and sticks and some wearing lion-like masks. They play drums and clap wooden blocks together to scare away the lions. They also use bright lights and light watch fires at night.

The name Long Shields refers to the Matabele warriors of the late 19th century who were known as “the people of the long shields,” for the tall rawhide shields they carried into battle.

Even though there’s an average of 30 lions-human conflicts per month, communities surrounding Hwange have seen a decline in lions attacking cattle.

“We definitely know that the program has actually been able to chase some lions from the community back into the park so in that way it becomes effective,” said Lovelater Sedede, a parks ecologist, but she warns: “Lions running away from the sound of vuvuzelas do not totally eradicate the problem. Lions could get used to it and hence there is need for more research methods to fight lion and human conflict.” 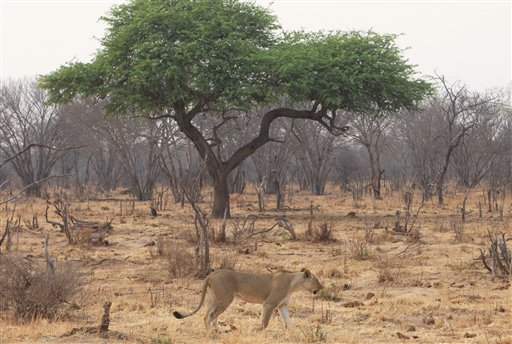 The surrounding communities are pleased with the results.

“We have noticed that the challenges from predators have gone down … our animals are protected and the predators are kept away,” said Vincent Mangenyo, a local leader.

Forty percent of the fatalities of lions in the Oxford study are at the hands of livestock owners or as a result of their attacks on livestock, said Stapelkamp, representing the single biggest cause of death.

“I can’t … tell the world that lions are the most important thing in the world and we must conserve them,” he said. “I can’t, because there are people who are hungry, starving in Zimbabwe. They lose all their livestock to a lion in a night.”

But thanks to the Long Shield guards, not only are livestock saved, noted Stapelkamp, so are lions.