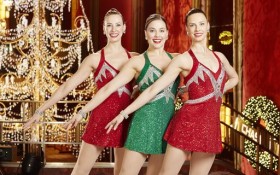 The Rockettes are supposed to look alike. But siblings?

Three of the long-legged, high-kicking performers are athletic sisters… and two are identical twins.

Meet Kristin, Lisa and Alison Jantzie, celebrating their fourth year as Rockettes together. The brown-haired, blue-eyed sisters are from the rural community of Lacombe, in Canada’s western Alberta province, and will be performing together on stage at the world-famous Radio City Christmas Spectacular in New York City.

“It’s kind of wonderful to be onstage with your family,” said Alison, dance captain in the recent Broadway show “Gigi” with Vanessa Hudgens. “We’ve kind of made this a tradition for ours, obviously.”

Kristin, in her 11th Christmas show, was the first to be a Rockette. She and her twin, Lisa, technically the oldest by a few minutes, got their first professional jobs at age 18 at the Tokyo Disney Resort.

Kristin later auditioned for a touring production of the Rockettes in Los Angeles and got the job after showing her skills at tap, jazz and precision dance. Both of her sisters went to see her when the show went to Detroit in 2005.

Lisa looked at the stage and, well, saw herself: “When you see somebody you know doing something, it kind of does open your eyes to the possibility.”

Kristin’s sisters eventually joined her at Radio City Music Hall, but took their own routes. Lisa, who gravitates toward ballet, worked at the National Ballet of Canada and Alberta Ballet. She’s in her sixth Rockette show, and she and Kristin were in the recent spring Rockettes show.

Alison, the youngest, loves musical theater and studied at the Randolph Academy in Toronto. She acted in regional productions of “Cats,” ”High School Musical” and “Mary Poppins.” She’s in her fourth Radio City show.

The sisters are split into two rotating, 40-person casts — with Kristin and Alison in one and Lisa in the other.

Some weeks they’ll perform 17 shows a week, and having some sibling love is both helpful and motivating.

They live in New York now, no more than 20 minutes apart. Lisa and Kristin live in the same building, nine floors apart. They say being Rockettes together is a nice oasis from their competitive careers, which sometimes pits them against each other.

The Jantzies — they have a brother who doesn’t dance — credit their mother with encouraging their dreams without ever being a stage mom. None of the sisters recalls taking a vacation that wasn’t dance-related.

Now every year at Christmas, the Jantzie family gets together in New York to celebrate. The sisters will look out from the stage and see some familiar faces. “Sometimes our family will wear their holiday sweaters. So we can sometimes pick them out,” Kristin said.