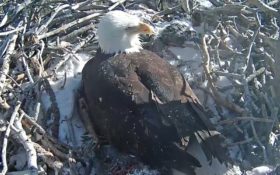 The second of two bald eagle eggs laid last month in Southern California has hatched in a nest watched for weeks by nature lovers via an online live feed.

You can watch here —

The first fluffy white chick made its on-camera debut when it poked its head out of the shell Sunday near Big Bear Lake east of Los Angeles.

The second hatched Monday. The mother and a male companion took turns nestling over the chicks to keep them warm as snow flurries moved through the San Bernardino National Forest.

The Institute for Wildlife Studies web page has thousands of comments from people watching the feed. The camera was installed by the group Friends of Big Bear Valley.

The U.S. Forest Service estimates the chicks will leave the nest in two to three months.