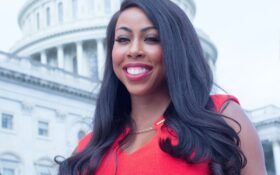 Her latest video, which debuted on Monday, shows that she may be Alexandria Ocasio-Cortez’s worst nightmare: a black conservative woman who exposes how identity politics is bad for minorities. Her red heels walked through the burned-out streets of Baltimore in her first video titled “Black Lives Don’t Matter to Democrats,” which has racked up more than half a million views on YouTube.

In her new ad, “The Plan,” she shows her vision of graffiti disappearing, run-down buildings revitalized, and black families going home from their new jobs to sleep in a safe neighborhood.

Nothing could be further from the views of Rep. Alexandria Ocasio-Cortez, D-N.Y.

Ocasio-Cortez—who grew up in wealthy Westchester County and called herself “Sandy” when she attended elite Boston University—supports socialism, violent riots, and the wholescale dismantling of police forces across the nation. “Defunding police means defunding police,” she said. She called New York City’s massive reduction in NYPD funding a “disingenuous illusion.”

But Klacik says if you defund the police, “Who do you think that crime is going to be perpetrated against? Other black people. We are then the prey even more.” “We need more funding. We need more recruiting,” she said. “So, this ‘defund the police’ narrative makes absolutely no sense.”

The overwhelming number of black Americans agree with Klacik. A Gallup poll from August found that 81 percent of blacks said they would like to see police spend the same amount of time or more policing their neighborhoods.

AOC not only opposed the police, but she encouraged the mobs that looted one city after another, including her own district. After the New York State Assembly passed a bill restricting police officers’ ability to fight off violent criminals, she tweeted, “Stay in the streets. It’s working.”

Klacik, on the other hand, said it was wrong that “Democrats just let these bad actors continue.”

The only positive thing that came out of the unrest is that the rioters exposed “just how many horrible mayors we have around this country,” Klacik said. “After this, many will not be re-elected & republican candidates will most likely have a shot in cities that have had a democratic stronghold.”

Klacik even took on Alexandria Ocasio-Cortez head-on over the issue of law-and-order.

AOC said that “maybe” rioters engaged in weeks of arson, looting, and police shootings because the rioters “need to feed their child and they don’t have money, so they feel like they either need to shoplift some bread or go hungry.”

Klacik responded by tweeting out a video of looters rampaging through a store to steal armfuls of Nike shoes. “WARNING,” she said. “This video has extreme levels of ignorance & may cause you to tweet it to @AOC showing her just how ridiculous her statement was about people committing more crime because they are hungry.”

This video has extreme levels of ignorance & may cause you to tweet it to @AOC showing her just how ridiculous her statement was about people committing more crime because they are hungry. pic.twitter.com/odqfTsGJFB

AOC attacked the United States as a whole, saying America isn’t “an advanced society,” but a “dystopia” that’s only “10 percent better than garbage.”

No wonder Klacik says the Republicans “seem to be the party of optimism and hope.”

Klacik, a new political face, has gotten the best of some of the top names in the Democratic Party. When Joe Biden said, if you don’t vote for him, “you ain’t black,” Klacik told The Daily Caller, “I’ve been black for 38 years.”

Klacik also sunk her nails into Joy Behar of The View. After Behar attacked her, Klacik asked, “Is this Joy speaking? The same Joy that paraded around in blackface not too long ago?” Behar cut her segment early.

Klacik’s example as a conservative black woman is so threatening to the media that CNN cut away from her speech at the Republican National Convention.

“We saw many major cities paint Black Lives Matter on the streets,” Klacik said. “We want careers, we want opportunity, and…you’ll get that from President Trump.”

“That’s my vision,” she said in her new video. “The corrupt leaders hate it. They attack me for taking a stand—for wanting better for our people, our children, our communities. But I’m not the only one who wants better,” she said.

“You cared about our black lives more than our own Democrat leaders,” Klacik told black voters. “They have done nothing for us. Now they can’t hide. It’s time for change. We are that change.”

Klacik will face off this fall against Democratic Rep. Kweisi Mfume, a former leader of the NAACP who would be one the most left-wing Democrats in Congress.