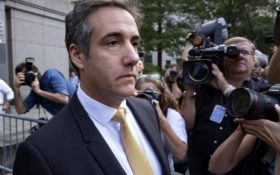 If the mainstream media had it’s wish, Michael Cohen’s plea deal with prosecutors on Tuesday would mean the beginning of the end for President Donald Trump.

But these media talking head fantasies aren’t grounded in reality.

Trump is not sunk. He’s not going to be impeached. It’s not the end of “Make America Great Again.”

It’s not even close, according to Harvard legal scholar Alan Dershowitz. He told NewsmaxTV that Tuesday “was a bad day for the White House.”

“But some of the networks have been playing taps, basically saying this is the end of the presidency,” Dershowitz, the legal expert that mentored former President Barack Obama, said. “That seems a little bit over the top and exaggerated.”

Yes, it looks bad for Trump — and that means it’s a headline the media loves.

And to be fair, Cohen’s move is embarrassing… because in the high stakes political theater of Washington, D.C., Democratic leaders like Maxine Waters will get to make a mountain out of a molehill.

But in the end, this is all a “Hail Mary” attempt to set-up Trump by special counsel Robert Mueller.

“Why was Michael Cohen investigated? Because the ‘Steele dossier’ had him making secret trips to meet with Russians that never happened, so his business dealings got a thorough scrubbing and, in the process, he fell into the special counsel’s Manafort bin — the bin reserved for squeezing until the juice comes out,” political analyst Mark Penn wrote on The Hill on Wednesday.

“The plot to get President Trump out of office thickens, as Cohen obviously was his own mini-crime syndicate and decided that his betrayals of Trump meant he would be better served turning on his old boss to cut the best deal with prosecutors he could, rather than holding out and getting the full Manafort treatment. That was clear the minute he hired attorney Lanny Davis, who doesn’t try cases and did past work for Hillary Clinton,” Penn wrote. “Cohen had recorded his client, trying to entrap him, sold information about Trump (while acting as his lawyer) to corporations for millions of dollars, and didn’t pay taxes on millions.”

But in the legal sense, that is little more than “he said, she said.” In this case, it’s the word of the President of the United States against Cohen, who is a self-proclaimed liar. Who paid what, to whom, and why? It all depends on who you ask. For years, in public and in private, Cohen claimed he made two payments on his own. Now that he’s facing jail time, he says Trump secretly ordered them paid from his presidential campaign.

The president says that’s not true.

So… what happens next?

One can look at historic rulings from the past decade to get an idea. Former Democratic presidential candidate John Edwards went to trial over much more concrete accusations of campaign finance violations in 2012… and was acquitted. The other charges against Edwards were later dropped by prosecutors, in part because they’re so difficult to prove.

In other words, the best case scenario for Trump is that no one believes Cohen. For months, critics have been warning that Cohen will say anything he can to save his own skin. Cohen is facing up to five years in prison for tax evasion and is saying what Mueller wants, in order to minimize the punishment.

But, what if the mainstream media gets it’s wish: The worst case scenario?

What happens if Mueller finds rock solid, smoking gun proof that Trump did actually commit campaign finance violations… and then the FEC and prosecutors slam the president with the most harsh penalties ever in U.S. history?

One doesn’t have to go back far in legal history to find this example.

That exact thing happened in 2013 to Obama. After being audited for campaign finance violations, Obama’s administration confessed to accepting more than 1,300 illegal contributions — totaling more than $1.8 million.

For comparison, Trump is accused by Cohen of two campaign violations.

The Obama campaign was then slammed with one of the largest ever penalties in history — a fine of $375,000.

“President Barack Obama’s 2008 campaign was fined $375,000 by the Federal Election Commission for campaign reporting violations — one of the largest fees ever levied against a presidential campaign,” Politico reported in Jan. 2013.

In other words, if guilty Trump — the real estate billionaire — faces a fine that would be equal to a parking meter fine to the average American.

Once again, the mainstream media’s anti-Trump hysteria is overblown.

No need to lay out the funeral attire quite yet.