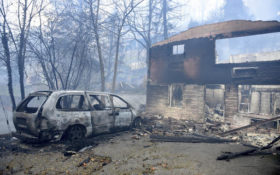 If you were watching the mainstream media Tuesday morning, you were probably unaware, but multiple red states were burning.

While CNN and other liberal news organizations reported for hours on the latest criticism of President-elect Donald Trump, a major wildfire raged out-of-control throughout the South, burning down a resort in Tennessee.

As these U.S. citizens scrambled for information from news sources, they were met with shocking indifference — and it may have cost one family everything.

Michael Reed is a resident of Gatlinburg, Tennessee whose home was one of the over 100 buildings lost to the wildfire Tuesday, and realized too late that his wife and daughters hadn’t been evacuated.

“After hearing about the fires, Reed and his son tried to drive to Gatlinburg. However, the two got stuck in traffic and were not able to turn around,” local station WBAC reported. “The last time he heard from them, he told his wife to call 911 for help after she said she saw flames across the street from the home. Michael and his son were able to get into Gatlinburg to visit shelters, but have not found them.”

“We are just hoping for a miracle,” Reed told the station, adding that there were some hopeful signs at his ruined home that the family had escaped.

During the blaze, social media users launched to a firestorm of their own, attacking the major news networks for their shamefully absent coverage.

Fake news is too busy propagating anti-Trump rhetoric to cover the red city of #Gatlinburg burning. Do your job, @CNN.

#CNN,#MSNBC ,#ABC,#CBS,#NBC Breaking news for you , #Gatlinburg is ON FIRE. leave #Trump alone awhile and get down to news affecting lives.

My thoughts & prayers are with everyone effected by the #Gatlinburg fires. Scary stuff. Not much media coverage.Why? Too busy bashing Trump?