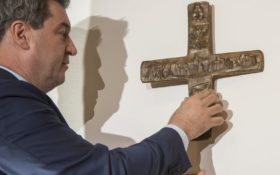 There’s a pro-Christianity movement growing around the world that the mainstream media won’t tell you about it — but it’s going to be impossible to hide for much longer.

The European Union’s ultra-liberal agenda has caused a massive backlash among average citizens — and so Western civilization is experiencing a wave of conservatism and Christianity. Dr. Steve Turley calls it “a massive blow back against the anti-cultural properties of globalization and its secular(ism).”

The huge backlash – which the liberal media isn’t reporting on — is taking the form of a popular resurgence of national patriotism and traditional Christian values.

“A new, conservative age is rising,” Dr. Turley states as he cites study after study. “We are seeing the revitalization of Christian civilization.”

John D. Martin, in an article entitled, “Reports of Christianity’s Death in Europe Have Been Greatly Exaggerated,” lays out the facts of a worldwide movement back to the conservative values of family, God, and country.

While the mainstream media emphasize pro-abortion movements funded by billionaire globalist George Soros and “progressive” European state leaders, what is happening on a grassroots level is just the opposite.

With the free flow of information on the internet, liberal media and their government cohorts no longer control what news people see and what information people are exposed to. As a result, Turley says, Western and Eastern Europe, Russia, Ukraine, even the Middle East, Africa, and South America are rediscovering their conservative Christian roots.

Paris hosted the largest single anti-abortion demonstration in Europe, with over fifty thousand social conservatives from across France at the 2016 March for Life. All told, in cities across Romania and Moldavia over 100,000 people participated in pro-life marches.

A rising number of Frenchmen are going into the priesthood. Evangelical Protestants are growing in Europe as well. There were over 200,000 new baptisms among German evangelicals alone.

A 2016 “European Citizens’ Initiative” begun in Bulgaria defined marriage as between one man and one woman. The grassroots initiative directly confronted the E.U.’s push for homosexual marriage.

In Romania, the Orthodox Church collected over three million citizen signatures for a constitutional amendment recognizing only traditional marriage. Romanian faithful –which make up 85 percent of the population — were joined in the effort by Catholics, Protestants, and Evangelicals.

Even Russia is returning to its Christian foundations. With church and state working together, sweeping laws have been passed against abortion, including banning late-term abortions and all abortion advertisements, with the goal of abolishing child murder entirely.

In concert with those legal pro-life efforts are concrete help for women in crisis pregnancy. The Russian Orthodox Church has set up hundreds of practical help centers all across the nation, and the government has both passed laws and funded support for families and pregnant women.

As a direct result, Russia reported the lowest abortion rates since the end of World War Two. Under the Soviet Union’s state-enforce atheism, there were between four and five million abortions a year – the most per capita of any nation. Recent stats now report 700,000 – significantly less than the United States’ annual toll of preborn babies destroyed.

And with church and state cooperating, societal attitudes are changing. Since the nineties, the number of Russians who consider abortion completely “Unacceptable” has tripled to over a third of the citizenry.

The Russian government additionally banned thirteen of the most popular pornographic websites in the world.

Georgian President Mikhail Saakashvili and Orthodox Patriarch Ilya have been credited with reducing abortions by 50 percent in the country. The beloved Patriarch announced he would personally baptize every third child of any family. The Saakashvili administration encouraged birth over abortion by giving parents of a third child a subsidy of $600, and $1200 for a fourth child.

In another act of resurgent traditionalism, the nation of Poland and its leaders officially declared Jesus Christ as Lord and King in 2016.

“Immortal King of Ages Lord Jesus Christ, our God and Savior,” the ceremony — which included President Andrzej Duda and other top government officials — proclaimed. “Bowing our heads before You, King of the Universe, we acknowledge Your dominion over Poland, those living in our homeland and throughout the world.”

In the fervent prayer ceremony church and state officials asked forgiveness for turning from God, and renounced Satan and all his evil works.

“We entrust the Polish people and Polish leaders to you,” they prayed. “Reign in our homeland and reign in every nation — for the greater glory of the Most Holy Trinity and the salvation of mankind.”

In every aspect of life, including “in our hearts,” “in our families,” “in our schools and universities” and “throughout the nation,” the Polish leaders cried out, “Rule us, O Christ!”

“We pledge to defend Your holy worship and preach Your royal glory, Christ our King, we promise!” they vowed.

Relatedly, Poland refused to go along with the European Union’s attempts to force nations to accept masses of unvetted Islamic immigrants.

African nations such as Nigeria continue to stand against U.S. and E.U. pressure to accept abortion–on–demand.

Even as far away as South America, the President of Peru, Pedro Pablo Kuczynski, officially consecrated his city to Jesus Christ at a National Prayer Breakfast in Lima.

“By the authority vested in me, I make an act of consecration of myself, my family and the Republic of Peru to the love and protection of Almighty God,” Kuczynski said.

After eight years of U.S. tax dollars pushing liberal nonsense around the globe, the Trump administration has promised to stop allowing federal funds to be “used to discourage Christian values in other democratic countries.”