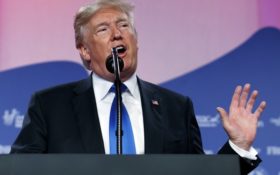 The mainstream media is practically glowing with delight after Democrats won two governor positions Tuesday — and CNN is calling it a “blue wave” and a total rejection of President Donald Trump by American voters.

But the truth is far more nuanced.

In Virginia, a state that didn’t vote Trump…

That previously had a Democratic governor…

A Democrat won. That’s supposed to be a stunning message that resonates with the White House?

No, CNN, it’s quite the opposite. Tuesday’s election was a message for the do-nothing establishment Republicans.

Refusing to listen to the 2016 voter mandate has left conservatives frustrated and unwilling to back non-Trump supporting candidates.

Trump himself tweeted a warning to the establishment —

Ed Gillespie worked hard but did not embrace me or what I stand for. Don’t forget, Republicans won 4 out of 4 House seats, and with the economy doing record numbers, we will continue to win, even bigger than before!

It’s time for the GOP establishment to listen and get on-board with the White House.

The conservative message on Tuesday to Republicans was simple: Follow through with your 2016 promises, or voters won’t support you or your preferred candidates in 2018.