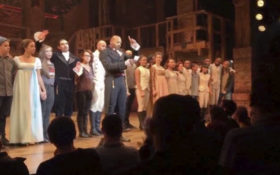 This weekend’s bizarre rant from the cast of Hamilton to Vice President-elect Mike Pence proves that liberals just don’t get it — and we can blame the mainstream media for it.

If there’s any doubt remaining that the coverage of President-elect Donald Trump is hypocritical and unfair, look no further than their feeding frenzy this weekend after Pence was verbally confronted by the cast of the musical Hamilton.

To his credit, Pence shrugged off the incident, saying he wasn’t offended and the response was “what freedom sounds like” and moved on.

But the media hasn’t. And that’s the problem.

These talking heads proudly march any C-list celebrity with a half-thought out opinion in front of the world without regard for substance. In article after article, the mainstream media is rejoicing in celebrity temper tantrums against Trump.

But here’s what they won’t tell you –most celebrities are as outraged by this propaganda as everyday Americans.

For example, Steven Van Zandt of the E Street Band, who is not shy about making liberal political statements, lashed out at the Hamilton cast’s actions.

“When artists perform the venue becomes your home. The audience are your guests,” Steven Van Zandt of the E Street Band, tweeted. “It’s taking unfair advantage of someone who thought they were a protected guest in your home… A guy comes to a Broadway show for a relaxing night out. Instead he gets a lecture from the stage! Not a level playing field. It’s bullying. You don’t single out an audience member and embarrass him from the stage. A terrible precedent to set.”

Surely Van Zandt’s band is as popular as the cast of Hamilton.

So, where is his front-page story?

In California, pop superstar Kanye West also voiced his support of Trump over the weekend in his own bizarre rant, telling a booing audience he was putting his life, career and “public well-standing” at risk by talking to the fans “like this.”

“I am here to change things. And things won’t change until people admit their own falsehoods.” West told the vocally angry audience he was on his “Trump (expletive) tonight” and warned the media would attack him, then abruptly cancelled his show.

Could you imagine their frenzy if he’d attacked Trump? There would be articles showering West with praise. It would be the leading story in every news outlet.

Instead, since West expressed sympathy for conservatives, it’s back-page news.

Even liberal entertainer Jon Stewart, who made a career out of attacks against Republicans, has also come to the defense of Trump, admitting in a recent CBS interview that the liberal media was “hypocritical” in their attacks against conservative voters.

I haven't seen the Democrats this mad since we freed the slaves!

But the media won’t show you that.