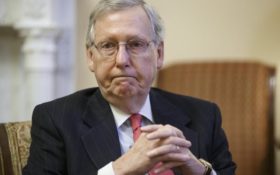 The Democrat-controlled House passed a short-term spending bill Wednesday to keep government agencies funded at current levels through Dec. 23, giving lawmakers more time to craft a roughly $1.7 trillion appropriations package that would cover the full fiscal year 2023. The one-week extension passed the House by a vote of 224-201, mainly along party lines.

By midnight on Friday, the 50-50 Senate must either pass the extension or accept the possibility of a partial government shutdown sometime in the future. The bill would give Congress an additional week to reach a compromise and now goes to the Senate for a vote before it is sent to President Joe Biden to be signed into law.

But other Senate Republicans are very angry.

“This brings upon us the lie that Republicans really are fiscally conservative. The Democrats aren’t. They will not pretend to be fiscally conservative. Not one of them up here gives a darn about the debt. The Republicans all profess to be, but when you make them vote on the PAYGO resolution, pay as you go, that we can’t have new spending without offsetting it, they always vote to exempt it. So the omnibus will be 3,000 pages. We’ll get it two hours before they want to pass it. No one will read it. But hidden in the 3,000 pages will be we’re going to waive PAYGO,” Paul reportedly said Wednesday on Fox Business Network.

“We have completely and totally abdicated the power of the purse. Republicans are emasculated. They have no power, and they are unwilling to gain that power back.”

“In just a few weeks, we’re gonna have a Republican House,” Cruz tweeted earlier this month. “Why on earth would a lame duck Congress pass Nancy Pelosi’s appropriation bills?”

The Republicans flipped the House in last month’s midterm elections, with the Republican majority to be sworn in next month.

However, the Democrats gained one seat in the Senate, and they’ll enjoy a 51-seat majority in the next Congress. Since the 1970s, the Senate has banned filibusters on budget-related bills. So, the Senate can pass budget bills with only 50 votes, just like the House.

For that reason, McConnell has been seeking a bipartisan bill to fund federal operations through 2023.

Sen. Mitch McConnell, the top Republican in the Senate, has made the case that passing a full-year spending bill this Congress is better than the alternatives because it ensures a sizable increase in spending for defense.

Establishment Republicans said delaying negotiations into January sets up a collision course that could lead to shutdown, and they fear the GOP would end up taking the blame.

“If a truly bipartisan full-year bill without poison pills is ready for final Senate passage by late next week, I’ll support it for our Armed Forces,” McConnell said Wednesday. “Otherwise, we’ll be passing a short-term continuing resolution into the new year.”

House Republican Leader Kevin McCarthy has countered that the two senators leading the efforts to craft the spending bill won’t be in Congress next year and thus won’t be accountable to voters for their work. Sens. Patrick Leahy, D-Vt., and Richard Shelby, R-Ala., are both retiring. Leahy is the chairman of the Senate Appropriations Committee and Shelby is the lead Republican on the panel.

McCarthy said Republicans earned the opportunity after the midterm elections to shape the spending legislation early next year. He called for an extension that would last into the first quarter of 2023.

“Allow the American people what they said a month ago — to change Washington as we know it today,” McCarthy said.

The final bill is also expected to include the Biden administration’s request for another $37 billion in aid to Ukraine as well as other bipartisan priorities, including a funding designed to prevent another riot at the Capitol. The bill would also make it more difficult for lawmakers to object to a electoral votes and make clear that the constitutional role of the vice president in the proceedings is solely ministerial.

Shelby has said the two parties were about $25 billion apart on overall spending, though they are in agreement on spending about $858 billion on defense. Lawmakers announced Tuesday night that they had reached agreement on a “framework” that should allow negotiations to be completed by next week, but they provided no details.

By midnight on Friday, Congress will need to decide whether to pass the one-week extension.