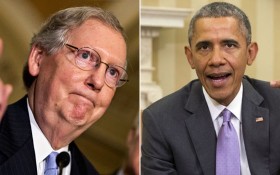 President Barack Obama has announced plans to nominate a Supreme Court justice in the next few weeks that he claims will be a good compromise candidate for his Republican rivals.

Senate Majority Leader Mitch McConnell responded yesterday by telling the president not to even bother, because the GOP isn’t buying Obama’s claims for a second.

McConnell emphatically ruled out any Senate action on whoever Obama nominates to fill the Supreme Court vacancy, an extraordinary step that escalated the partisan election-year struggle over replacing the late Antonin Scalia.

After winning unanimous public backing from the 11 Republicans on the Senate Judiciary Committee, McConnell told reporters that that panel would hold no hearings and ruled out a full Senate vote until the next president offers a nomination. Such steps would defy many decades of precedent that have seen even the most controversial choices questioned publicly by the Judiciary Committee and nearly always sent to the entire chamber for a vote, barring nominees the White House has withdrawn.

“In short, there will not be action taken,” McConnell told reporters.

The Kentucky Republican said he wouldn’t even meet with an Obama selection should the White House follow tradition and send the nominee to Capitol Hill to visit senators.

“I don’t know the purpose of such a visit,” McConnell said. “I would not be inclined to take one myself.”

Filling the vacancy left by Scalia’s unexpected death on Feb. 13 is crucial because without him, the Supreme Court is left in a 4-4 ideological knot between justices who are usually conservative and its liberal wing. The battle has invigorated both sides’ interest groups and voters who focus on abortion, immigration and other issues before the court.

After meeting privately with GOP senators for the first time since Scalia’s death, McConnell and other leaders said rank-and-file Republicans were overwhelmingly behind the decision to quickly halt the nomination process.

“Why even put that ball on the field?” Sen. Pat Roberts, R-Kan., said of hearings. “All you’re going to do is fumble it. Let the people decide.”

McConnell and other Republicans have said the high court vacancy should not be filled during a presidential election year and that the voters — by electing the next president — should choose who makes that nomination, pointing out that it’s been over eight decades since a nomination occurred and was filled in the same election year.

“Because our decision is based on constitutional principle and born of a necessity to protect the will of the American people, this committee will not hold hearings on any Supreme Court nominee until after our next president is sworn in on January 20, 2017,” Judiciary Committee Republicans said in their letter to McConnell.

In remarks Tuesday at Georgetown University law school, Justice Samuel Alito sounded unfazed about possibly spending the rest of this year in a court whose members are locked in a 4-4 tie.

“We will deal with it,” Alito answered when asked about Republicans’ resolve to oppose anyone Obama nominates.