McConnell next on Tea Party hit list? - The Horn News 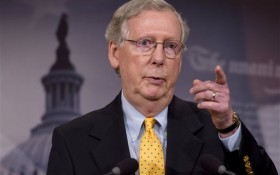 With the Tea Party celebrating the ouster of House Speaker John Boehner, who is leaving his post at the end of October, the group already appears to be setting its sights on another long-time party nemesis.

This weekend, Roger Villere, the Louisiana GOP chair and a member of the Republican National Committee’s executive committee, called for McConnell to resign amid growing opposition from more conservative legislators.

“Mitch is a good and honorable guy, but the base is leaving our party,” Villere said in an interview with the Washington Times.

And McConnell didn’t win any new friends among the Tea Party faithful with his recent move to strip a government funding bill of a provision that would cancel federal funding of Planned Parenthood.

McConnell’s move has rankled conservatives such as Sen. Ted Cruz, R-Texas, and Tea Partyers in the House who want the taxpayer money withheld from the women’s health care provider after the release of secret videos in which Planned Parenthood officials discussed the transfer of fetal tissue to researchers.

While the Tea Party does not have the powerful bloc in the Senate that is has in the House, the group could use the same blueprint to oust McConnell that worked with Boehner.

In particular, the group will work to install one of its own in the House Speaker role or other powerful leadership positions. Candidates mentioned thus far have includes Rep. Jim Jordan of Ohio and Trey Gowdy of South Carolina.

McConnell’s job requires him to work closely with House leadership — a task that would become increasingly difficult with Tea Party members in key roles. Compromise could grind to a halt and the conflict could be a significant source of frustration for McConnell, as it was for Boehner. It also could undermine the party’s trust in his leadership.

Villere, of course, says he has a simple solution that could head off the pending GOP crisis at the pass.