Mayor, city councilman both in hospital after bareknuckle brawl - The Horn News 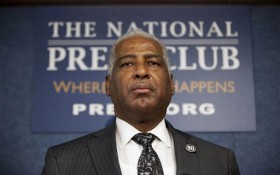 The mayor of Alabama’s largest city got into a fight with a city councilman during a meeting Tuesday, sending both men to the hospital.

Media covering the council meeting reported hearing a man shout “No, No!” during the fracas in a small room outside the chamber. After the dust settled, Mayor William Bell and Councilman Marcus Lundy both had minor injuries and could face charges.

It’s not clear who started the fight or what it was over, but Bell spokeswoman April Odom said Lundy recently had to return the city car he was driving because the law prohibits council members from having municipal vehicles.

Councilwoman Kim Rafferty said there have been power struggles between Bell, 66, and the council for a while.

“Boys need to grow up and be men and do the job they were elected to do,” she said. “They need to sit across the table and talk about conflict resolution.”

Council President Johnathan Austin said at a news conference that the mayor assaulted the councilman, and that Lundy planned to press charges. Austin showed photos of scrapes on the back of Lundy’s left leg.

Odom issued a statement saying an arrest warrant would be taken out on Lundy, who she said refused to talk to police afterward. The city tweeted that Bell was undergoing an MRI and CT scan following the fight.

Bell, a former council member, has been mayor since 2010. He briefly spoke at a law enforcement training session that included a mention of workplace violence before the council meeting but missed a chamber of commerce luncheon afterward.

Lundy, elected in 2013, has worked as an executive with several companies. He chairs the council’s Economic Development, Budget and Finance Committee.