Maxine Waters having a very bad week... - The Horn News 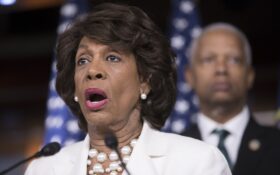 If there was ever a worse time for Rep. Maxine Waters, D-Calif. to have a bad week, it would be now — just weeks until the election.

The veteran congresswoman has been hit by scandals and attacks not once, not twice, but on three separate occasions in the past few days.

With a little more than twenty days to go until the election, Waters was caught without a mask after lecturing Americans to wear one, her district opponent called her out at her own doorstep (literally), and a former aide of Waters has been accused of being a Chinese Communist Party-linked lobbyist.

That’s a bad week for anyone — let alone one facing a serious re-election challenge.

Fox News’ Tucker Carlson aired a segment on his show which featured Waters caught and confronted by an everyday citizen for not wearing a mask in public… despite demanding others do the same.

This is the same congresswoman who attacked President Donald Trump and the late Herman Cain for not wearing a mask.

She even has a new nickname. Collins referred to her as “Mansion Maxine” and says is her $6 million home far from her district where everyday residents struggle.

“Maxine Waters has been in office for 44 years,” he said, walking around her district. “Has anything gotten any better around here?”

Collins says her district has a stunning homicide rate and 43 percent poverty rate, it seems like a real wonder that she’s been trusted to do the job for as long as she has.

Do you know where I am?
Maxine Waters’ $6 Million Mansion.

Do you know where I’m NOT?
Her District.

Mansion Maxine Waters doesn’t live in her District — I do.

My name is Joe Collins and I’m running for Congress against Maxine Waters.

And just when it seemed as though the news couldn’t get any worse, it was reported by The National Pulse that a former ” legislative director and chief counsel” for Waters a lobbyist in Washington, D.C. on behalf of entities linked to the Chinese Communist Party.

Dana Thompson, during his time at the Democratic lobbying corporation Podesta Group, drove in millions while lobbying for a company known as ZTE.

ZTE, as it happens, is on Trump’s list of designated national security threats.

Thompson also reportedly made an extra $40,000 in the Vertex Railcar Company, which reportedly at the time was backed by a Chinese government company considered a proxy of the Chinese military.

And over a two-year period, his efforts saw him rake in $900,000 after lobbying for the “China-U.S. Exchange Foundation (CUSEF),” which it turns out, based on National Pulse information, is nothing more than a propaganda initiative.

It seems as though Maxine is better off hiding inside that $6 million mansion right about now.