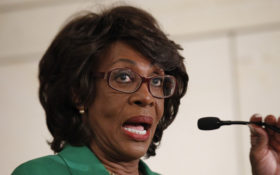 California Rep. Maxine Waters is a rising star in Washington, D.C. thanks to her relentless calls for President Donald Trump’s impeachment.

Right on cue, Waters has announced her intentions to skip Trump’s State of the Union address on Jan. 30, a move that critics have dismissed as a political stunt meant to win support among her liberal base.

But a U.S. Army veteran flipped the script on Monday — and it could turn Waters attempt to score cheap political points into a humiliating moment for the California Democrat on national television.

The veteran tweeted out a response to Waters and asked for help from Fox News, so that he could take the liberal lawmakers spot at the State of the Union and show his support for the president.

@FoxNews Everyone please help and retweet. I would like to take Maxine Waters seats at The State Of The Union Address. If they don't want to go this Military Veteran would gladly go. I'd tell the President how much he means to myself, family, Military, and all of his supporters!

On Tuesday morning, “Deplorable Vet” got a little help from Fox News–

Please help me! I had a tweet on Fox News! pic.twitter.com/6dALhFFHCQ

Should Maxine Waters seat be given to a patriotic veteran?