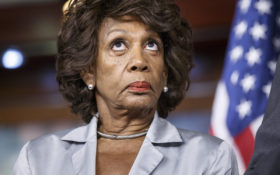 Rep. Maxine Waters was shot down by President Donald Trump on Thursday at a Pennsylvania rally.

The president dubbed Waters as the new celebrity of the Democratic party and took a jab at her I.Q. level.

Trump, once again, says that Maxine Waters has a "very low IQ." (via Fox) pic.twitter.com/D0wAQxfFg9

“You know who the new star [of the Democratic party] is?” Trump asked. “Maxine Waters!”

Just the mention of her name caused the crowd to scream and boo.

Echoing past claims that Trump made about Waters, he added,  “Very low IQ. Low IQ.”

The widespread boos continued as Trump said, “She’s like their new star.”

This was not the first time Trump gave Waters a taste of her medicine.

On July 3, Trump tweeted, “Crazy Maxine Waters, said by some to be one of the most corrupt people in politics, is rapidly becoming, together with Nancy Pelosi, the FACE of the Democrat Party. Her ranting and raving, even referring to herself as a wounded animal, will make people flee the Democrats!”

It is no secret that many Americans agree that Waters is one of the most corrupt politicians.

Would you like to see Waters resign from office? Vote below —

Should Maxine Waters resign for her nasty attacks?