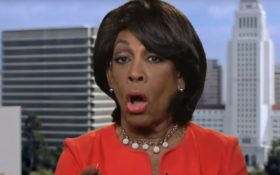 Rep. Maxine Waters, D-Calif., has repeatedly been named “The Most Corrupt Politician of the Year” by the left-leaning Citizens for Responsibility and Ethics in Washington throughout her career.

But don’t mention “personal benefits” to her face, or you’ll get an earful.

Waters lost her cool during yet another round of voting for Speaker of the House of Representatives when Rep. Matt Rosendale, R-Mont., named Waters during a speech.

“There’s no rules, I did not use anyone’s name… Excuse me, Maxine,” he said.

It was too late. When it was Waters’ turn to vote for House speaker, she took the opportunity to attack Rosendale.

“This is my ninth vote for Hakeem Jefferies,” Waters said, and then pointed at a group of GOP Congressmen sitting behind her.

“Matt Rosendale, get it together!” she shouted, pointing her finger and saying something unintelligible on the video.

Maxine Waters just went crazy on the house floor. Maxine is a lawless basket case who is unfit to serve on any Congressional Committees. pic.twitter.com/O159mhis2y

READ MORE: Maxine Waters has been paying off her daughter… for years