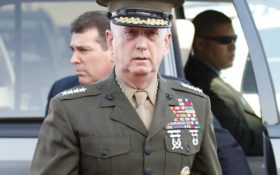 Defense Secretary Jim Mattis blamed the inability of Congress to deliver an annual defense budget for what he called a shockingly poor state of combat readiness as the United States faces fierce rivals, including what he described as an “urgent and dangerous threat” from North Korea.

Testifying Monday night before the House Armed Services Committee, Mattis took aim at lawmakers for repeatedly approving short-term spending measures that provide too little money and lack the authority the service branches need to prepare their troops for the battlefield. He also faulted Capitol Hill for not repealing a law that strictly limits defense spending even though there is widespread support for doing away with the measure.

Congress has “sidelined itself from its active constitutional oversight role,” Mattis said. “It has blocked new programs, prevented service growth, stalled industry initiative and placed troops at greater risk.” Despite support from the committee, Mattis said “Congress as a whole has met the present challenge with lassitude, not leadership.”

Mattis, who appeared before the panel with Marine Corps Gen. Joseph Dunford, the chairman of the Joint Chiefs of Staff, said North Korea’s “continued pursuit of nuclear weapons and the means to deliver them has increased in pace and scope.” He called Pyongyang’s programs to build weapons of mass destruction “a clear and present danger to all.”

The defense secretary warned that a war with North Korea would be “very, very serious” and be unlike anything the world has seen since 1953 when the Korean war ended. Dunford said the U.S. and its allies would win, but the casualties would be “unlike anything we’ve seen” in decades.

The committee called Mattis and Dunford to field questions about President Donald Trump’s proposed military budget for the 2018 fiscal year, which begins Oct. 1. Trump requested $639 billion for the Pentagon, including $65 billion for ongoing military operations. Yet Republican lawmakers are pressing for upward of $30 billion more to be added to the budget. They argue the extra money is needed to rebuild the military degraded by years of war and erratic budgets.

“The world is not stopping and waiting on us to get our act together,” said Rep. Mac Thornberry, R-Texas, the committee chairman. “It moves on, and it is moving in a dangerous direction.”

During the wide-ranging hearing, Mattis sought congressional approval to shutter excess military bases – a move the Pentagon concludes will save billions of dollars but one that lawmakers have previously rejected.

Mattis proposed a new round of base closings starting in 2021. He said the department “currently has more infrastructure capacity than required for operations.” That outlook won’t change even if the service branches grow in size, he said. Closing the unneeded bases would save $10 billion over a five-year period, Mattis said, which could be used to acquire four nuclear submarines or dozens of jet fighters.

But military installations are prized possessions in congressional districts. The GOP-led Congress rebuffed the Obama administration’s requests to reduce the number of military bases even though the Army and Air Force said they had vastly more space for training and basing troops than they need. But lawmakers have refused to go along, questioning the data and the analysis the Pentagon used to make its argument for fewer facilities.

Mattis also faced skepticism, particularly over the up-front cost required. Thornberry said it took 10 years to break even from the last time the Pentagon’s closed bases.

“That has left a bitter taste in a lot of folks’ mouths,” Thornberry said.

Mattis pledged to examine the data to avoid past pitfalls.

Mattis said the Trump administration continues to deliberate a new strategy for Afghanistan, telling the committee “we need to do things differently.”

The war in Afghanistan began in October 2001. The U.S. has about 9,800 troops there conducting counterterrorism operations against insurgents and training the Afghan army. Although they ended their combat mission against the Taliban in 2014, they are increasingly involved in backing up Afghan forces on the battlefield. The top commander there has told lawmakers he could use several thousand more U.S. troops to end the stalemate in the country.

But Mattis declined to tip his hand on the emerging blueprint, saying only that it would not rely solely on the military and a decision would be coming soon.

“The bulk of the fighting will continued to be carried by the Afghan forces,” he said. Mattis added that the plan would require additional money that’s not in the current budget request.