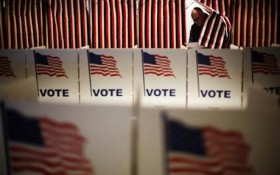 While the media distracted the country with the illegal immigrant “caravan” moving through Central America toward the U.S. border, Democrats secretly whipped up a caravan of voter fraud – by telling illegal aliens, and dead people to vote for them in this year’s midterm elections.

The Texas Democratic Party mailed out voter registration forms to hundreds—maybe thousands—of illegal aliens all over the Lone Star State – and told them to vote!

The letter, mailed directly from the Democratic Party, says, “Urgent! Your voter registration deadline is October 9.”

“Your voter registration application is inside,” the letter says. “Complete, sign and return it today!”

The mailer said, even if you weren’t sure you should register, you should “Mail it in!”

If illegals did that, they could wind up in jail… because the documents are pure voter fraud.

Each and every voter registration form had already been filled out by Democrat officials—with the boxes that say the person is a legal U.S. citizen over the age of 18 are already checked!

Those counties are right on the Rio Grande, just across Mexican border. Almost one-in-ten of every illegal alien in Texas lives in Hidalgo County… and more than two-thirds of them don’t have a high school degree, so they may not all understand the law.

In fact, many illegal aliens said they thought the laws had changed to let them vote, according to the Texas secretary of state’s office.

Can’t imagine who gave them that idea.

Not only are illegals getting fraudulent voting forms, but people whose relatives have been dead for years got the mailer, too, according to election officials.

Ironically, the Democrats’ election fraud gambit was brought to light by non-citizens themselves, who were afraid someone was trying to break U.S. election law in their name—and they’re right!

Just turning in a phony voter registration could land you in hot water.

“It is a crime to register to vote in Texas if you are a felon with an incomplete sentence or a non-U.S. citizen,” said David C. Kifuri Jr., whose relatives blew the whistle on the Democrats’ dirty tricks. “A non-U.S. citizen can face criminal and immigration jeopardy for misrepresenting citizenship status for the purpose of voter registration.”

Texas Governor Greg Abbott, a Republican, is piping mad about it and promises “serious consequences” if the Democrats broke the law —

A complaint says the Texas Democratic Party asked noncitizens to register to vote, sending applications with citizenship box pre-checked. This is being investigated. If true there will be serious consequences. #txlege #tcot #PJNET https://t.co/dgSPT8f77G

Somebody has got to clean up the system, the president told a huge campaign rally at Houston’s Toyota Center last night.

“You’ve got so many voting illegally in this country, it’s a disgrace,” Trump told the tens of thousands who were able to get inside the president’s event, supporting Senator Ted Cruz.

The president said that big government liberals encourage voter fraud because “the Democrats want to give illegal aliens free welfare and the right to vote.”

With the economy booming and jobs easier to find than ever, liberals have to import people who want their government handouts and super-sized welfare spending.

“The Texas Democratic Party is inviting foreign influence in an election in a federal election cycle,” said a spokesman for the anti-voter fraud, Public Interest Legal Foundation, which brought the underhanded letter to the media’s attention.

Illegal immigrants can already vote in places like Portland, San Francisco and the D.C. suburbs.

PILF found 5,556 illegals registered to vote in Virginia, and hundreds had voted in Pennsylvania.

They’re the Democrats secret weapon to get control of the House this year, unless Americans demand officials stop them from stealing the elections across the country.