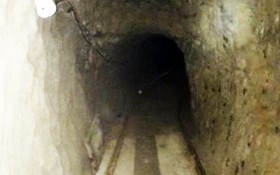 It is one of the longest smuggling tunnels ever uncovered. And it was built right under our noses.

U.S. authorities said Wednesday that they discovered a cross-border tunnel that ran a half-mile from a Tijuana house equipped with a large elevator to a lot in San Diego that was advertised as a wooden pallet business, resulting in seizures of more than a ton of cocaine and seven tons of marijuana.

It was the 13th sophisticated secret passage found along California’s border with Mexico since 2006, including three on the same short street in San Diego that runs parallel to a border fence with a densely populated residential area on the Mexican side. The unusually narrow tunnel was only about three feet wide, equipped with a rail system, lighting and ventilation. 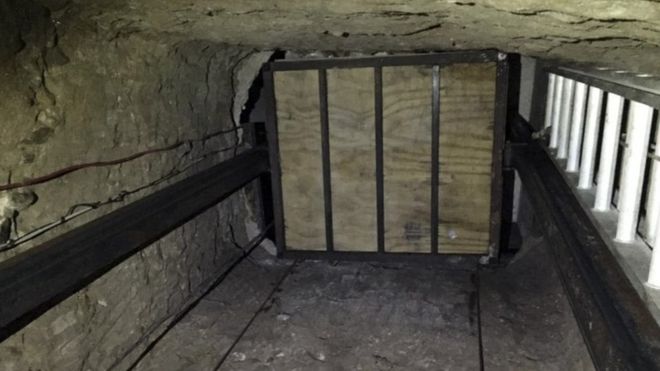 The tunnel was unusual because it was used for cocaine, not just marijuana, said Laura Duffy, U.S. attorney for the Southern District of California. Tunnels are often built for marijuana because its bulk and odor make it more difficult to escape border inspectors’ scrutiny than cocaine and other drugs.

The elevator, which was big enough for eight to 10 people, was located in the closet of a Tijuana house whose floors were strewn with mattresses, Duffy said. The tunnel zig-zagged for 874 yards to the fenced commercial lot in San Diego, where the exit was covered by a large trash bin.

Other tunnels that have ended in California were inside houses and warehouses.

“It’s a rabbit hole,” Duffy told reporters. “Just the whole way that it comes up and that it comes up out right into the open, it is a bit ingenious, I think, and it’s something completely different than what we’ve seen.”

Investigators didn’t know when the tunnel was completed. Margarita Ontiveros, who works at a law office next to the San Diego lot, said the tenants arrived about a year ago and often bought and sold wooden pallets.

“They loaded and unloaded a lot of pallets,” Ontiveros said. “They sold very cheap.”

Investigators began to monitor the lot daily last fall after Border Patrol agents assigned to the area saw heavy traffic and grew suspicious, said Duffy. The prosecutor said she was “fairly confident” that the first drug load was sent earlier this month but didn’t rule out the possibility that some got through undetected.

Six people were arrested in the San Diego area Friday on drug- and tunnel-related crimes, including one U.S. citizen, two Cubans who were granted asylum and three Mexicans who were legally entitled to be in the country, Duffy said. 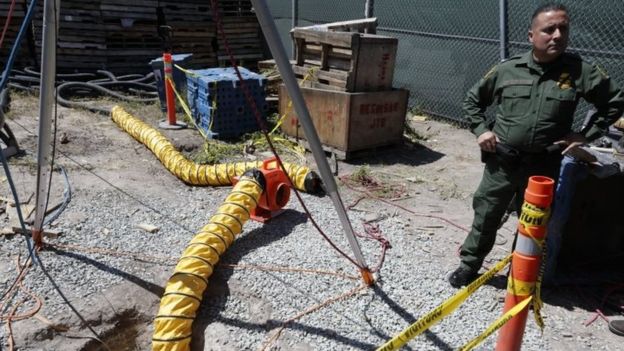 Authorities saw a trash bin forklifted on to a truck at the San Diego lot on April 13 and followed it to a parking lot in San Diego, a U.S. Immigration and Customs Enforcement Homeland Security Investigations investigator said in a criminal complaint. Two days later, San Diego County sheriff’s deputies stopped a truck after it left the parking lot, seizing 2,240 pounds of cocaine and 11,030 pounds of marijuana.

Marijuana found in the tunnel and trash bin brought the total pot haul to more than seven tons, authorities said.

The discovery demonstrates the enduring appeal of tunnels to smugglers, despite the significant time and money required to build one. Dozens have been found along the U.S.-Mexico border in recent years, mostly in California and Arizona. Many are found incomplete.

The San Diego-Tijuana region is popular because its clay-like soil is relatively easy to dig with shovels and pneumatic tools, and both sides of the border have warehouses that provide cover for trucks and heavy equipment.