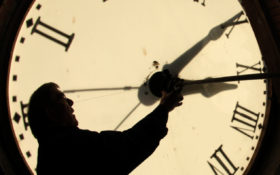 Massachusetts residents wouldn’t have to reset their clocks during the darkest months of the year under an idea being studied on Beacon Hill.

On Wednesday, an 11-member commission will begin weighing the economic and health impacts of the state remaining on Eastern Daylight Time year-round.

Massachusetts stays on Eastern Daylight Time much of the year, but shifts to Eastern Standard Time on the first Sunday in November by setting clocks back an hour.

The state returns to Eastern Daylight Time on the second Sunday of March, when clocks jump ahead an hour.

Critics say the shift makes the days seem even shorter, with the sun setting before 5 p.m. during much of November, December and January.

Supporters say ending the shift will create darker mornings when students are heading to school.