Mass arrests in Cuba ahead of Obama visit - The Horn News 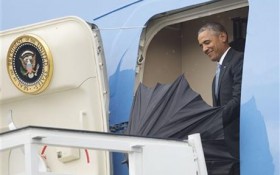 Ignoring criticism from Republican leaders and human rights groups alike, President Barack Obama has announced his plans to sit down with Cuban dictator Raul Castro today at Havana’s Palace of the Revolution.

And when Obama and Castro meet, Obama will be lending credibility to a Cuban government that threw dozens of dissidents into prison shortly before he arrived.

Reports have surfaced of anti-government protests that occurred over the weekend, and mass arrests that followed. Cuban authorities seemingly engaged in a campaign to round up anyone who could make the country look bad during Obama’s visit.

Particularly targeted were the so-called Ladies in White, who represent the wives and female relatives of jailed political dissidents.

Obama opened the first presidential visit to Cuba in nearly 90 years on Sunday when Air Force One touched down in Havana.

For Cubans, the glaring questions are whether their own government is ready to prove the ambitious diplomatic opening is more than just talk — and whether Obama would stick up for democracy during his trip.

Indeed, the U.S. and Cuba are working more closely together now than at any time since relations took a nose dive amid Cuba’s 1959 revolution. Yet while Americans are now flocking to Cuba in greater numbers, closer ties have yet to bring about the degree of change that many Cubans hoped would follow after Obama and Castro moved to normalize relations 15 months ago.

Since taking power in 2008, Raul Castro has orchestrated economic and social reforms with lasting and broad-based impact, though to many Cubans and foreigners they appear slow to materialize. Castro has given little ground when it comes to changing Cuba’s single-party system or easing strict limits on media, assembly and political dissent.

His visit was to continue Tuesday with a major speech that Cuban officials said would be carried on TV. Before departing for Argentina, Obama planned to attend a game between Major League Baseball’s Tampa Bay Rays and Cuba’s beloved national team.