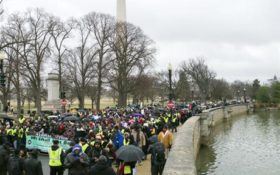 Regardless of race, religion, or political affiliation, most Americans come together today to celebrate a true American icon: Dr. Martin Luther King Jr.

But there’s one thing the history books won’t tell you — despite being claimed by the Democrats, he was never a member of their political party.

Dr. King was reportedly independent… and some rumors say he was actually a Republican.

That won’t stop the Democrats, however. Despite rain and cold weather, marchers filled several blocks in Washington, D.C. on Saturday as they rallied in a Martin Luther King Jr. Day march that was used by organizers to protest against President-elect Donald Trump.

Controversial figure Rev. Al Sharpton had organized Saturday’s “We Shall Not Be Moved” march and rally ahead of Monday’s Martin Luther King Jr. Day holiday. But Trump, whose inauguration will take place in less than a week, was clearly on organizer’s minds.

Holding umbrellas and bundled against temperatures in the mid-30s the crowd chanted “No justice, no peace” and “We will not be moved” but also “We will not be Trumped” and “Love Trumps hate.”

Sharpton also used the event to call on marchers to oppose Trump’s nominee for Attorney General, Alabama Sen. Jeff Sessions, and asked the crowd if they were willing to visit their senators’ offices to oppose the nomination.

As they celebrated King and denounced Republicans in their politically charged march, every single speaker failed to mention that King was nonpartisan.

Despite their claims, King was not a Democrat. In fact, he never publicly endorsed any political candidate, and was known to criticize both political parties for failing the African-American people.

Marchers themselves expressed a range of emotions about Trump. Debra Conyers of East Orange, New Jersey, said she was a toddler in 1963 when Martin Luther King gave his “I Have a Dream” speech. She said Obama “helped Wall Street” and “helped Main Street.”

As for Trump: “I’m waiting to see how it unfolds,” she said.